Skip to content
Home / Magazine / A Tip of the Dink 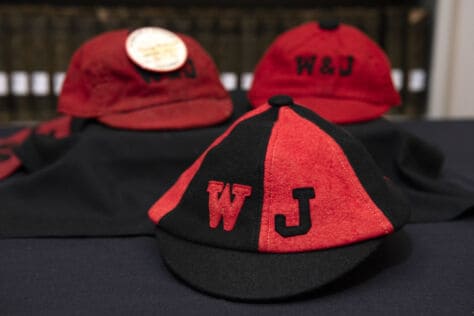 Never walk past an upperclassman without tipping your dink.

That was the rule of the Freshman Court, or Lex Ultimo, at W&J in the early and mid-20th century. Failure to tip, of course, could land a freshman student in front of the Lex Ultimo. Or possibly worse.

So what was a dink? It was a small, red and black cap with a felt-covered metal button on top and a small bill in the front.

All freshmen – at the time male-only – were required, in accordance with the Freshman Rules, to wear the caps.

When they walked past an upperclassman, they had to take off their dinks and hit the buttons on the top of the ground. The most respectful students, therefore, were the ones with the felt worn off their buttons.

If you have your own story to share about wearing and tipping your dink, or the consequences for not doing so, email us at wjmagazine@washjeff.edu.

Sorry, we couldn't find any related posts at this moment. How about searching for a topic?