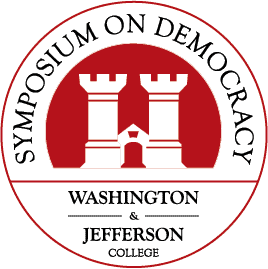 Why is civility so often lacking in our public discourse, especially when strongly held opinions are expressed? The tenor of our debates in the public square, on cable TV, and on social media can deepen distrust and further polarize all parties. Yet it can be easier to talk at each other than with each other. It takes courage to invite and listen to another point of view, to constructively seek to understand, even when agreement is not possible. It has been said that courageous conversations are rare because they are the ones we know we need to have, and know we are not having.

Can we voice our views passionately and persuasively without resorting to ad hominem attacks or unnecessarily divisive tactics? Our 2019 Symposium on Democracy explored how courageous conversations, characterized by civil discourse, are essential to a healthy democratic society.

Morning Keynote: Kathleen Kennedy Townsend, "Our Short Time on Earth Together"
Kathleen Kennedy Townsend is the eldest child of the late Sen. Robert F. Kennedy and the former lieutenant governor of Maryland. Townsend’s presentation, “Our Short Time on Earth Together," reflected on her father’s legacy. She currently works with the Economic Policy Institute in Washington, D.C.

Lunchtime Keynote: Kerwin Swint, Ph.D., "Surviving the Era of 'Gotcha' Politics: The Past and Future of Civil Discourse in America"
Kerwin Swint, Ph.D., is the Interim Dean for the College of Humanities and Social Sciences and Professor of Political Science at Kennesaw State University. He is the author of "Mudslingers: The 25 Dirtiest Political Campaigns of All Time."

Evening Keynote: Robert Shetterly, "An Artist's Journey into History, Democracy, Power and Reality"
Robert Shetterly is an artist best known for his portrait series, "Americans Who Tell the Truth."

Kathleen Kennedy Townsend is the Director of Retirement Security at the Economic Policy Institute, and currently serves as a research professor at Georgetown University, where she founded the Center for Retirement Initiatives. She has also served as chair of the Governor’s Retirement Security Task Force for the State of Maryland.

Townsend is a Woodrow Wilson Fellow and has taught foreign policy at the University of Pennsylvania and the University of Maryland. She founded the Maryland Student Service Alliance, making Maryland the first and still only state to make community service a requirement for high school graduation.

An honors graduate of Harvard University, Townsend received her law degree from the University of New Mexico where she was a member of the law review. She has received 14 honorary degrees. Townsend’s book, Failing America’s Faithful: How Today’s Churches Mixed God with Politics and Lost Their Way, was published by Warner Books in 2007.

Dr. Kerwin Swint is an author, speaker, and professor of politics at Kennesaw State University in Atlanta. Specializing in Campaigns and Elections and Mass Media, he or his work has appeared in a number of national and international media, including CNN, FOX News, the BBC, the ABC program The View, The Wall Street Journal, The Los Angeles Times, NPR, The Toronto Star, The Daily Mail (UK), National Journal, Mental Floss, Publisher's Weekly, Salon, Slate, The Chronicle of Higher Education, and numerous other media.

He is the author of: The King Whisperers: Power Behind the Throne from Rasputin to Rove; Mudslingers: The Twenty-Five Dirtiest Political Campaigns of All Time; Dark Genius: The Influential Career of Legendary Political Operative and Fox News Founder Roger Ailes; and Political Consultants And Negative Campaigning: The Secrets Of The Pros.

Robert Shetterly was born in 1946 in Cincinnati, Ohio. He graduated in 1969 from Harvard College with a degree in English Literature. At Harvard he took some courses in drawing which changed the direction of his creative life -- from the written word to the image. Also, during this time, he was active in Civil Rights and in the Anti-Vietnam War movement.

After college and moving to Maine in 1970, he taught himself drawing, printmaking, and painting. While trying to become proficient in printmaking and painting, he illustrated widely. For twelve years he did the editorial page drawings for The Maine Times newspaper, illustrated National Audubon's children's newspaper Audubon Adventures, and approximately 30 books.

Robert´s paintings and prints are in collections all over the U.S. and Europe. A collection of his drawings & etchings, Speaking Fire at Stones, was published in 1993. He is well known for his series of 70 painted etchings based on William Blake's “Proverbs of Hell”, and for another series of 50 painted etchings reflecting on the metaphor of the Annunciation.

His painting has tended toward the narrative and the surreal, however, for more than ten years he has been painting the series of portraits Americans Who Tell the Truth. The exhibit has been traveling around the country since 2003. Venues have included everything from university museums and grade school libraries to sandwich shops, the Cathedral of Saint John the Divine in New York City, and the Superior Court in San Francisco. To date, the exhibits have visited 26 states. In 2005, Dutton published a book of the portraits by the same name. In 2006, the book won the top award of the International Reading Association for Intermediate non-fiction.

The portraits have given Shetterly an opportunity to speak with children and adults all over this country about the necessity of dissent in a democracy, the obligations of citizenship, sustainability, US history, and how democracy cannot function if politicians don’t tell the truth, if the media don’t report it, and if the people don’t demand it.

Shetterly has engaged in a wide variety of political and humanitarian work with many of the people whose portraits he has painted. In the spring of 2007, he traveled to Rwanda with Lily Yeh and Terry Tempest Williams to work in a village of survivors of the 1994 genocide there. Much of his current work focuses on honoring and working with the activists trying to bring an end to the terrible practice of Mountaintop Removal by coal companies in Appalachia, on climate change, and on the continuation of systemic racism in the US particularly in relation to the school-to-prison pipeline.

Since 1990, he has been the President of the Union of Maine Visual Artists (UMVA), and a producer of the UMVA’s Maine Masters Project, an on-going series of video documentaries about Maine artists.

The theme of W&J’s second annual Symposium on Democracy was Courageous Conversations: Civil Discourse in Divisive Times. Tying into the 2019 theme, these selected quotes on democracy come from artist Robert Shetterly’s portrait series, “Americans Who Tell the Truth.”

Robert Shetterly’s portraits of those quoted below can be viewed on the W&J campus for two weeks following the Symposium.

“Too much and too long we seem to have surrendered community excellence and community values to the mere accumulation of material things…The gross national product measures neither our wit nor our courage, neither our wisdom nor our learning, neither our compassion nor our devotion to country. It measures everything, in short, except that which makes life worthwhile, and it can tell us everything about America—except whether we are proud to be Americans.” – Robert F. Kennedy (Speech at University of Kansas, March 18, 1968)

“If we could be friends by just getting to know each other better, then what are our countries really arguing about? Nothing could be more important than not having a war if a war could kill everything.” – Samantha Smith, student and peace activist

“Non-violence is a powerful and just weapon which cuts without wounding and ennobles the man who wields it.” – Martin Luther King, Jr., clergyman and Civil Rights leader

“As a young man I tasted the bitter fruits of segregation and racial discrimination, and I didn’t like it. I used to ask my parents, my grandparents, and my great grandparents, ‘Why segregation? Why racial discrimination?’ And they would say, ‘That’s the way it is. Don’t get in trouble…’ But when I heard the words of Dr. King, I knew then that I could strike a blow against segregation and racial discrimination, and I decided to get in trouble. I decided to get in the way. But it was good trouble, necessary trouble. Democracy is not a state. It is an act.” – John Lewis, Civil Rights Activist and Congressman

“When people in a democracy are not educated in the art of living --- to strengthen their conscience, compassion, and ability to question and think critically --- they can be easily manipulated by fear and propaganda. A democracy is only as wise as its citizens, and a democracy of ignorant citizens can be as dangerous as a dictatorship.” – Paul K. Chappel, Army Captain, peace activist, writer

“Rights and responsibilities cannot be separated. Every right that we stand upon must be balanced by a set of corresponding responsibilities. We cannot legitimately make a demand unless we are willing to take responsibility for creating a world where that demand can be met.” – Sherri Mitchell, lawyer, Indigenous and Human Rights Activist

“It is our responsibility as global citizens to learn to communicate with those we are taught to see as enemies. For it is only when we understand each other, love each other, and think of every man and woman as our brother and sister that we will finally be on our way to ending war.” – Medea Benjamin, human rights advocate, anti-war activist, and author

“…jingoism, racism, fear, religious fundamentalism: these are the ways of appealing to people if you’re trying to organize a mass base of support for policies that are really intended to crush them.” – Noam Chomsky, linguist, political activist, writer

“…Much of the insensibility and hardness of the world is due to the lack of imagination which prevents a realization of the experience of other people.” – Jane Addams, social reformer 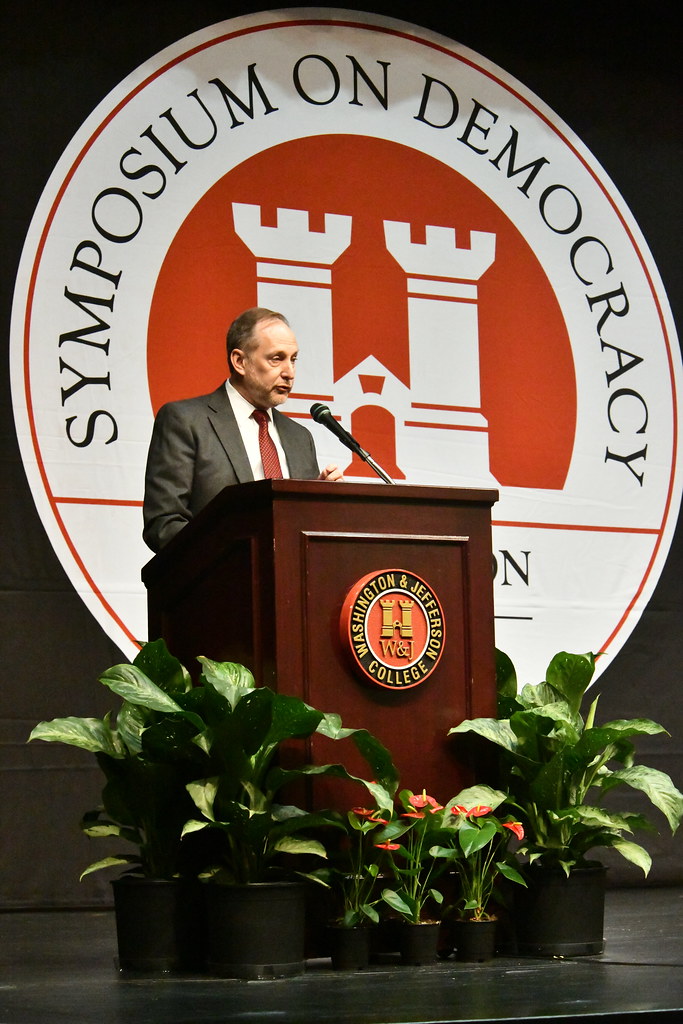 Funding for the Symposium on Democracy is generously provided by the Guy Woodward, Jr. Foundation.