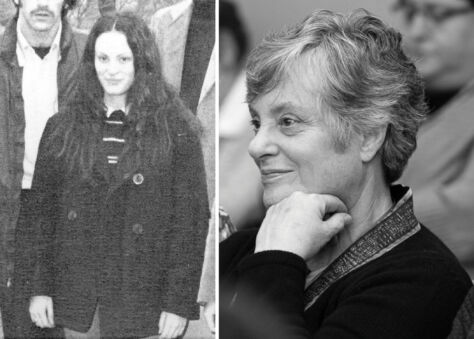 Fifty years ago, an outspoken, college-age Betsey Hurwitz-Schwab ’74 left her home outside of Washington, D. C., to join a seemingly radical experiment at Washington & Jefferson College. The experiment, with its share of supporters and skeptics, not to mention a bevy of committees, board meetings, debates, student opinions and planning, would introduce women students to campus – and end a 189-year male-only tradition. That was September 1970.

She joined another 76 freshman females, along with 39 female upper-class transfer and other students – still only about 12 percent of the total enrollment that fall – and helped ignite a historic, no-turning-back transformation at W&J.

But the transformation also left indelible, foundational marks on Hurwitz-Schwab that have strengthened her fortitude as a female leader in global corporate and grass-roots non-profit environments, ignited her passions for serving the neglected and abused, and prepared her well for a career that has culminated in guiding W&J as a current member of its board of trustees.

“I was pretty outspoken and showed up on campus as a big-city Jewish girl with some radical ideas,” says Hurwitz-Schwab, who was a member of W&J’s first co-ed graduating class, of her arrival to on campus. She liked the idea of W&J, she adds, because she viewed the school as a “smaller, more intimate college with an opportunity to be known.”

Says Hurwitz-Schwab: “I didn’t think I was [outspoken] at the time, but if you ask other people, they would say I did shake things up.”

That hasn’t really changed, she suggests, in a world that, even today, continues to need some shaking up, especially when it comes to leadership and equality.

Q. As a member of the first co-ed graduating class, how would you sum up your experience and what you learned from it?

Our first year was difficult. Many guys didn’t want us there. In fact, Chatham students [Chatham University at the time was female-only] would say, ‘If you want an education, go to Chatham. If you want an M.R.S., go to W&J.’ Some women decided not to come back the next year. For me, I became much stronger, more independent and unwilling to accept that ‘a woman had never done whatever before.’ In several of my jobs, I have been the first and/or only woman to hold the position. I have been able to succeed in whatever endeavor I have pursued.

Q. What does diversity bring to education and society?

Given the opportunity, anyone can succeed.

Q. You once ran a human resources department for a global corporation. How should organizations introduce greater diversity in meaningful ways that enhance their missions and visions?

Organizations have to be strategic in the way they go about their diversification. They need to look at what an individual brings to the organization and who best would bring that viewpoint. That’s why we need diversity. Being strategic, you have to make sure the person buys into the mission of the organization. Will they support that mission?

Q. In what ways can leaders be champions for gender equality in the work force?

It’s really important that women support one another, and we still have a long way to go. There needs to be child care [that allows more women to work] and equal pay for women to succeed – and being seen as equal and as competent as anyone else.

Alondra Martinez Osorno won a prestigious award from The National Institutes of Health (NIH), the largest biomedical research center in the U.S.

Alumni Awarded for Achievements in Public Health, Chemistry and Service

Three W&J Alumni Award Winners were recognized during Homecoming 2014 for achievements in public health, chemistry and service to the College.