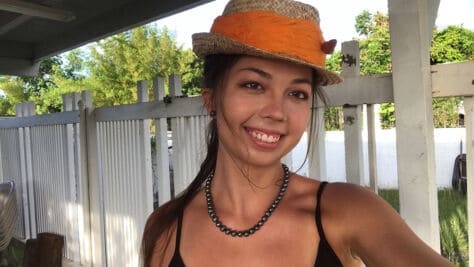 Ke’alohi Worthington ’19 found herself back in Hawaii when the COVID-19 pandemic sent graduate students home for the spring 2020 semester—presenting her with a unique opportunity to enhance her education and help people in her native state.

Worthington majored in neuroscience during her time at W&J and traveled the world studying cultural diversity through W&J’s Magellan Project. She currently is working toward a Master of Public Health degree in epidemiology at the University of Pittsburgh, which she is targeted to complete in spring 2021.

In returning home, she says she found what she considers a once-in-a-lifetime opportunity to combine her career passion for chronic illness in indigenous peoples and Native Hawaiian health with a demographic study of the pandemic, which has had a disproportionate effect on some Pacific Islander populations during the course of two COVID surges.

“Race is more than just a social construct in Hawaii,” says Worthington, who landed an internship in the spring and summer of 2020 with the Hawaii Department of Health. Her task: to provide demographic data analysis as part of an ongoing study looking at the effects of the pandemic on Native Hawaiians, as well as other Pacific Islander groups and minorities.

“Hawaii’s racial profile is drastically different than that of the rest of the US, which is why this project was pushed to the forefront and was needed for the next phase of Hawaii’s COVID response,” Worthington says.

Worthington says the study “seemed to really bring out stark health differences” among the various populations.

Initial data released by the health department in June 2020 showed that non-Hawaiian Pacific Islanders and Filipinos had the highest COVID-19 infection rates in Hawaii at the time, while Native Hawaiians were not experiencing disproportionate rates of virus infections, according to a June 6 article published in Civil Beat. The data did not, however, include the results of a more recent second surge in COVID cases there.

Worthington says her own interests in public health focus on chronic illnesses such as diabetes and dementia, particularly in Native Hawaiians. Such illnesses, she says, tend to leave this population more vulnerable to highly contagious diseases such as COVID-19.

“My culture has always been a big part of my identity and has always been an area of importance to me,” Worthington says. “For me, anthropological work just wasn’t enough. I wanted to help this community beyond just preserving the culture, and the work I’ve done in the health fields has allowed me to make a bigger impact.”

The Class of 2017 graduates have departed on their individual journeys beyond Washington & Jefferson College (W&J) and have thanked many supporters, but one sticks…

WASHINGTON, PA (June 15, 2020)–Though our Commencement festivities have been postponed, we’re still excitedly celebrating the Class of 2020 and all of their accomplishments. As…