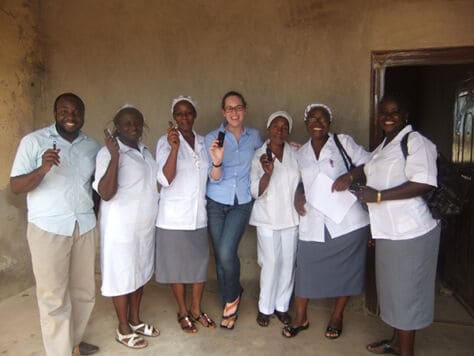 As a public health data strategist, Andrea Fletcher ’10 had been there before. In Kenya, South Africa, Ghana, Tanzania, Zambia, Burkina Faso, Guinea, and Malawi, she faced down Ebola, malaria, and HIV with teams of international health workers and technologists, collecting vital data and helping local governments track and manage public health crises with digital solutions.

Not surprisingly, as she was working on an HIV-related data project with the Digital Health Division of the Malawi government in Africa in the spring of 2020, her response to news of the surging COVID-19 pandemic wasn’t to cut and run. Instead, she and a team of 25 engineers and data analysts, including three Americans, dug in and quickly adapted their focus.

“When Italy started to explode [with COVID-19 cases], we sat down and had a team chat,” Fletcher says of the impending crisis, which the team expected to hit the African continent and Malawi soon thereafter. “The U.S. government and U.S. Embassy at that point weren’t saying much to citizens about whether we should have returned to the U.S., because cases were on the rise in the U.S. and we had no confirmed cases in Malawi. So we just pivoted to figure out how we were going to support the Malawi government in responding to this.”

As Fletcher noted in a March 2020 letter to W&J’s Biology department, “We are in a great position to help fight this thing as people with the training and knowledge to do so. Within my team, we have decades of training and experience in global health and have worked all of over the world fighting diseases.”

Fletcher credits her hybrid undergraduate degree in bioethics – combining biology and philosophy – with her desire to help others, particularly in areas without the public health resources to effectively help themselves. She earned a Master of Public Health degree in Global Health from Emery University, and she is working on her Ph.D. in Epidemiology and Population Health at the London School of Hygiene & Tropical Medicine.

Fletcher was working in Malawi as a lead data strategist for Cooper/Smith, a company that partners with the likes of the Gates Foundation to help solve public health problems around the world.

Among the challenges Fletcher faced was that “Malawi is a very poor country with very few resources.” While a majority of the population is under the age of 30, she says, at least 10 percent of the population has been diagnosed with HIV, which has left that population particularly vulnerable to the likes of COVID-19.

“And you can’t just tell people to stay home when they live on $1 a day and have to sell their produce,” she says.

Fletcher also had other obstacles to consider: “How do you handle different people who come through the borders? Supply chain data? How about lab results? What do you do with them and how will you communicate them to the population? And if you want to build a mobile app, that’s great. But who’s going to use it? You have to think about all of those challenges.”

Within a month of their team meeting, they developed and deployed a digital tracking system for the country to use in monitoring testing and contact tracing, among other considerations, and also helped launch new data tools for decision-makers.

As the pandemic spread, though, “things were changing on a daily basis,” says Fletcher. Facing potential unrest due to a contested election in Malawi at that same time, coupled with the shifting landscape of travel restrictions and flight cancellations, Fletcher left the country and returned to the United States, moving in temporarily with her parents in Indiana, Pa.

“It’s the principles of ethics – justice and equality,” Fletcher says about what continues to drive her public health efforts. “I see social injustice on a global scale. I’m a problem-solver, and part of our role is just being the people who could help solve a problem.”

Olin Art Gallery to host Here and There exhibit in February

Washington & Jefferson College (W&J) alumna and adjunct faculty member Emily Sciulli ’10 is returning to her roots to display her exhibition, Here and There,...

WASHINGTON, PA (Oct. 29, 2020)— When the global pandemic hit, and with immigration and the struggles those seeking asylum experience weighing heavy on her mind,…

Washington & Jefferson College graduate Charvonne Holliday, Ph.D. will return to W&J on Oct. 3 to speak with current students about her work and experience...