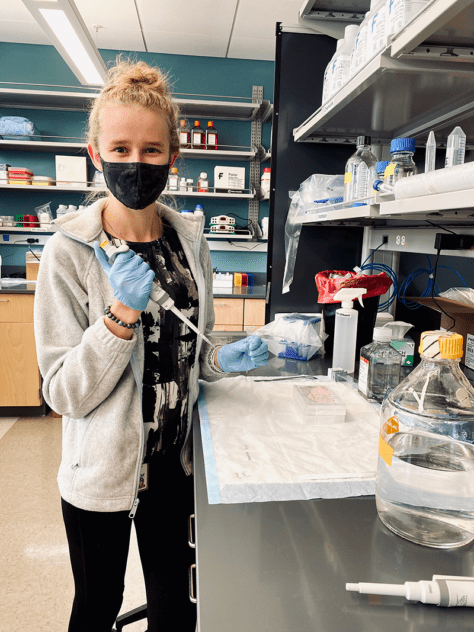 Published this month in Frontiers in Neuroscience, her article, “Altered Gut Microbial Load and Immune Activation in a Drosophila Model of Human Tauopathy,” connects the guts (or gastrointestinal tracts) of a bunch of tiny transgenic fruit flies (genetically modified fruit flies ) to Alzheimer’s Disease.

It’s based on research conducted by Hyde, a psychology and English double major, and her co-authors, Assistant Professor of Biology Dr. Kelly Lohr, and alumni Jerrik Rydbom ’21 and Halea Kohl ’20, who utilized transgenic fruit flies genetically modified to express human tau (a protein associated with Alzheimer’s Disease) to observe the interaction between the tau protein, the gut microbiome (the collective microbial content of the gastrointestinal tract), the immune system, and neurodegeneration.

In doing so, they revealed several connections.

“We’ve seen more of an association than a cause and effect,” Hyde said. “But basically, the tau causes the gut to move more slowly, and the slowed gut motility then allows…more gut bacteria to build up, and then the increased amount of bacteria in the gut activates the immune system, which then connects to the brain and is associated with neurodegeneration.”

It’s a complex process that took a good amount of time and collaboration between W&J students and faculty to uncover.

After Lohr did the preliminary work, she invited Kohl and Hyde to develop that research, before passing it off to Rydbom for replication and refinement. Hyde said the process was eye-opening.

“I learned that research is a lot about rolling with the punches because not everything works the first time,” she said. “You have to be flexible.”

As proud as she is of her role in the research, Hyde said the publication brings new meaning to her efforts.

“It feels good. It’s almost like the first step of saying, ‘I almost kind of made it.’ It’s like that first, ‘You’re on the right track, you’re going to maybe do something interesting,’” she said, adding that her education at W&J helped her get to the point of publication and will continue to help her in reaching her larger goal of earning a Ph.D in Clinical Neuropsychology.

“I definitely think W&J’s education in terms of how they embrace research…kind of sets you up so that if you want to do research, you have the background and ability to do it,” Hyde said.

Currently an intern in the Department of Neurobiology at University of Pittsburgh School of Medicine, Hyde has recently been offered a full-time research position pending her December graduation, and partially credits Biology Professors Dr. Candy DeBerry and Dr. Kelly Weixel, and Psychology Professor Dr. Lynn Wilson for the offer.

“I think W&J has given me a great network of professors and people here who know the field, know what research looks like, and have connections to help make your dreams a reality,” Hyde said.

WASHINGTON, PA (Jan. 24, 2020)—Between the fall and spring semesters, Washington & Jefferson College (W&J) students find ways to get ahead. During JayTerm, a two-week…

WASHINGTON, PA (June 1, 2022) – Samantha Sonnet ‘22 took her artistic talents to Atlanta, GA, during the 2022 spring semester for her Magellan project….

W&J Students take on the final frontier with NASA internships

Samuel Schaub ’18 and Garrett French ’18 are spending the time between semesters in Hampton, Va., interning at the NASA Langley Research Center.