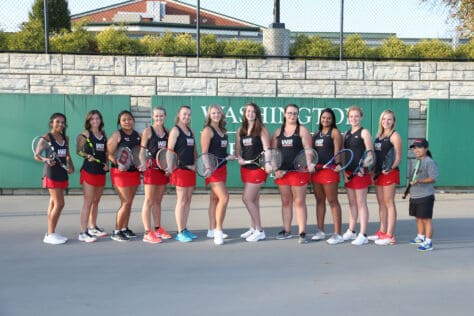 When Chris Faulk ’10 took the reins of the women’s tennis team in 2012, he had a vision for the program: to win a Presidents’ Athletic Conference Championship.

Faulk knew it would take a lot of work and teambuilding to achieve his goal; the team he inherited finished tied for last place at the conference championship two years prior.

In Faulk’s eighth season with the team, the Presidents claimed their first-ever PAC Championship, earning two comeback victories to claim the crown. The Presidents downed Westminster College in the semifinals Oct. 25 before rallying past perennial champion Grove City College in the championship match Oct. 26.

“It took longer than I thought it was going to,” Faulk said. “There were a few times in the past five years that I thought we would have a chance to win the conference tournament. Grove City and Westminster maintained a high level of play at the top.”

One of those close calls came in the fall of 2018 as the team entered the championship ranked the No. 2 seed facing No. 3 Westminster, though the Presidents fell short in their quest for a conference title.

The loss became a motivating factor for the 2019 team. Despite graduating one of their top players, the returning Presidents made it their preseason goal to avenge that loss and win the PAC.

Led by an experienced senior class (Megan Berard ’20, Jade Annaldo ’20, and Caitlin Shellhamer ’20), the Presidents bounced back from a difficult 2-5 start to win their final six matches of the regular season.

“I think those early matches were learning experiences for us,” Berard said. “We had opponents that could really play. That improved our ability, our skills, and our in-game strategy.”

After coasting past Bethany in this year’s quarterfinals for a seventh straight win, the Presidents had the rematch with Westminster that they had waited 371 days for.

Though they fell behind early in the match, each of the three seniors picked up critical victories in singles play to lift W&J into the championship match.

“Our team was so mentally strong this year,” Shellhamer said. “We went through a lot of tough matches. Even after losing to Grove City in the regular season, we knew we would see them again in the PAC Tournament.”

A straight set singles win by Shellhamer clinched a 5-3 victory for W&J in the championship match. The win gave the Presidents their first PAC title and their second-ever victory over Grove City.

Faulk credits past players for their work to push the program from the bottom to the top of the conference. One of the first players to buy into Faulk’s vision for the program was Courtney Brennan ’16.

“Courtney helped change the dynamic of the program,” Faulk said. “I still see the effects of what she did from five or six years ago today. She got her teammates to train harder, be more committed and work harder on and off the court. I can see that type of leadership this year with our captains (Berard and Shellhammer).”

“It was a joy to watch that final win come in and see their hard work pay off,” Brennan said. “Their success demonstrates that the standard of play is constantly being raised within the program. Winning the PAC Championship was always our goal and it shows the dedication Coach Faulk has put into this program.”

As the program continued to build, Faulk saw the value of relishing the smaller successes. Those included Rachel Johnson ’19 winning the No. 3 singles title in 2015, becoming the first W&J female to win a PAC singles title since 1993. Another milestone was the team’s first win over Grove City in 2016.

Maya Krishnasamy ’22, who was named W&J’s first PAC Player of the Year last season as a freshman, continued to excel during her sophomore campaign. The Ventura, Calif., native been a driving force behind the Presidents leap to the top of the conference. Krishnasamy put together a perfect 14-0 singles record this fall against Division III opponents.

“It was a big redemption year for us. It was tough losing Rachel (Johnson),” Krishnasamy said. “Our loss to Westminster last year — that really pushed us to be better this year. We felt like we were the underdogs going in. I think that was a huge advantage for us and helped us relax a little bit.”

Helping to cope with the loss of Johnson was Isabella Goldman ’23, who responded to Johnson’s legacy as the No. 2 singles spot and as Krishnasamy’s doubles partner in the No. 1 seed by rising to the challenge in both spots and earning the title of PAC Newcomer of the Year.

With a PAC Championship in hand, the Presidents will make their first-ever appearance in the NCAA Division III Championship Tournament this May.

WASHINGTON, PA (March 2, 2022)—This February, Washington & Jefferson College is celebrating Black History Month by continuing our “Then and Now” series, a joint effort...

Two teams from W&J have put their skills on display in NCAA competitions.