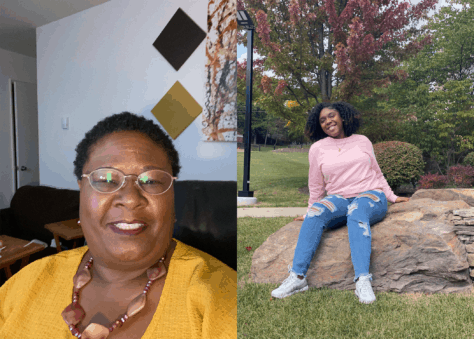 WASHINGTON, PA (Feb. 18, 2021)—During February 2021, Washington & Jefferson College is celebrating Black History Month by recognizing some of our accomplished Black alumni and the current students who are carrying on their legacy today. Each Friday, we’ll share a new feature showcasing how vital Black contributions are to the success of our institution.

When Cynthia Fulford, Ph.D., came to W&J in 1989, women had only been students on campus for just shy of two decades. What’s more, Black women were underrepresented not only in the campus population, but as leaders on campus.

“I did not know there were so few African American students on campus. There were 13 of us [in my class]. We worked hard to make sure we created a space for each other to get everybody through,” Cynthia said.

That space was the advent of the modern W&J Black Student Union. Though the organization had existed on campus in the 1970s, low numbers and environmental difficulties caused a lapse in the organization’s history, which Cynthia and her classmates were ready to rectify.

Empowered by the work of students that came before her, Cynthia led the charge to carve a space for Black students on campus to amplify their voices. Through programming efforts led by the BSU and a partnership with the Office of Admission, the College began to attract the attention of other Black students, and during Cynthia’s time as an undergraduate, the number of Black students more than tripled.

The opportunities she created for her peers while at W&J brought Cynthia a joy that stuck with her beyond her time with the College. While she had initially planned to start her own hair salon following graduation, she found that her dreams had changed as her leadership experiences mounted in number. Student programming allowed her to make a lasting difference in many lives—so she decided to pursue it as a career, becoming an influential leader of Diversity and Inclusion efforts in college administrations.

“W&J taught me to intentionally consider the impact and long-term benefits of programming as a student leader. Equipped with this knowledge, I have created offices, programs, and positions that continue to exist on former campuses. W&J taught me how to master sustainability in my work.” she said. “BSU allowed us to bring to campus events and speakers that would speak to what we trying to more successfully navigate on campus. We had to take ownership for ourselves and in doing so, I learned how to be influential as a leader and to make positive change.”

The challenges Cynthia faced during her time as a student aren’t entirely unfamiliar to students at W&J today; if anything, they’ve become more complex as the conversation around racial inequities in our society has grown more nuanced.

The W&J that Tamia Mickens ’21 entered as a freshman included more supports for students of color, but there still exists room for improvement. When Tamia didn’t see a leader on campus that felt representative of her own experience, she decided to become one herself.

“Being a LINK mentor, I saw there weren’t a lot of Black women in higher up positions on campus,” Tamia said. “I wanted to be able to help Black girls who didn’t feel seen, and I wanted to be the one who saw them.”

In addition to being a LINK mentor for two years, Tamia has found leadership opportunities as a volunteer at the LeMoyne Center next to campus working with Washington’s underserved youth population, a Navigator to welcome first year students to campus and help guide them through their first year, and as the president of the Black Student Union. She also has a YouTube channel where she shares tips for caring for natural hair.

As a leader of the BSU, Tamia has worked hard to help her peers find resources and feel at home at W&J, but the group has encountered some obstacles along the way.

“I know that we’ve had discussions in BSU where students feel left out of the larger W&J culture. I’m not sure what the solution to that is yet. If the school can figure out a way for students to feel more involved, that’s a crucial part of the experience,” Tamia says. “For our campus culture, we have to go above and beyond. Because I’m very involved, I do feel a part of the culture, but it has to be that way for those who aren’t involved as much.”

While it’s a tough problem to crack, Tamia is ready to do the work to help students—even beyond W&J. Like Cynthia, her experiences at W&J have evolved her goals, and she sees a future for herself in the campus diversity leadership space.

A Cultural Renaissance: A History of the BSU at W&J College

“High Demand, Uncertain Supply: Critical Minerals and Renewable Energy” will be the topic of the latest webinar in the Energy Lecture Series presented by Washington...

WASHINGTON, PA (February 14, 2022)—This February, Washington & Jefferson College is celebrating Black History Month by continuing our “Then and Now” series, a joint effort...