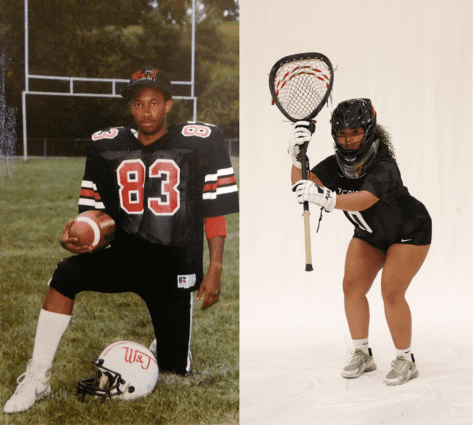 WASHINGTON, PA (February 7, 2022)—This February, Washington & Jefferson College is celebrating Black History Month by continuing our “Then and Now” series, a joint effort with W&J’s Black Student Union (BSU) that recognizes some of our accomplished Black alumni and the current students who are carrying on their legacy. Throughout the month, we’ll share new features showcasing how vital Black contributions are to the success of our institution.

Then: A Tough Competitor

An all-around athlete with stellar grades and a more-than-impressive co-curricular resume, he had offers from schools all over the nation, with even Ivy League Institutions fighting to recruit him. A world of opportunity in front of him, Adkins chose W&J for two reasons: the experience the College could offer him, and the advancements he felt he could offer the College.

“I knew if I chose W&J I would probably have the opportunity to revitalize their football program,” Adkins said. “Because, at the time, it sucked. It was terrible.”

A self-described leader, with a legacy of serving in leadership roles, Adkins accepted the school’s offer (which included a Presidential Scholarship—one of only five granted at the time), dug in his cleats, and went to work.

“Athletically, we turned the program around,” Adkins said. “The last losing season W&J had in football was my freshman year. We haven’t had a losing season since then. And my whole class will take some credit for that. We all came in and said, ‘We’re not going to lose.’”

And they didn’t. The team went to the national playoffs twice in Adkins’s four years at W&J and the national semi-finals once. A star athlete, Adkins played a large part in their success.

But his prowess and drive went beyond football.

Also a member of the men’s Track & Field team, Varsity Club, Student Government Association, and Pre-health Society, the determined biology major loved science and worked hard to get into medical school. Though he did, a summer internship at the Centers for Disease Control and Prevention showed him that he needed to make an impact in a different way, when, serendipitously, he was again recruited by W&J.

Now the Dean of Admission, he’s spent the last 33 years extending his legacy as an alumnus and improving the College.

The BSU was founded at W&J in 1992—just five years after Adkins graduated. Between then and now, the campus community has become increasingly more diverse.

“When I was at W&J, less than 5%, less than 3% even, of the student population was diverse,” Adkins said. “Now we’re over 20%. As an institution we’re not quite done yet, but I’m pretty proud of that.”

Now: A Force on the Field

Sophomore Kaitlyn Brown is taking W&J’s athletics to the next level.

The lone goalkeeper on the women’s lacrosse team, she played in every game of the team’s historic 2021 season, spending 660 minutes on the field and leading the team to ten victories in an 11-game total. That same year, she was named as the PAC Newcomer of the Year, and to the All-PAC First Team and PAC All-Tournament Team.

“Being the only goalie, I can see the whole field, so everybody kind of depends on me and relies on me to see what they can do better,” Brown said, noting that she’s given to leadership.

Currently undecided on her major but interested in business administration and Spanish, the young powerhouse from Maryland chose W&J for its athletics, but, being one of only two women of color on the lacrosse team, found further connection in the BSU.

“Being the only Black girl, Jas[mine Dey, the president of the BSU], kind of recruited me,” Brown said. “Coming in as a freshman, I didn’t really know what there was, and the BSU was the only club that was eye-opening—like going there and it being a safe space. It’s really just a nice time to kind of take a break and listen to everybody else.”

After she graduates, she’d like to start or own real estate or interior design business. A competitor at her core, she’s determined to make that happen.

“I’m doing what I need to do now,” Brown said, “so that I’m successful in the future.”

WASHINGTON, PA (July 13, 2020)–Though our Commencement festivities have been postponed, we’re still excitedly celebrating the Class of 2020 and all of their accomplishments. As…

Alumni Awarded for Achievements in Public Health, Chemistry and Service

Three W&J Alumni Award Winners were recognized during Homecoming 2014 for achievements in public health, chemistry and service to the College.