Home / W&J News / Celebrating W&J’s Black History: Then and Now ft. “The First Black Graduate and The Next Generation” 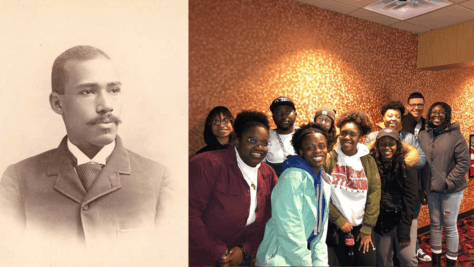 Celebrating W&J’s Black History: Then and Now ft. “The First Black Graduate and The Next Generation”

WASHINGTON, PA (Feb. 26, 2021)—During February 2021, Washington & Jefferson College is celebrating Black History Month by recognizing some of our accomplished Black alumni and the current students who are carrying on their legacy today. Each Friday, we’ll share a new feature showcasing how vital Black contributions are to the success of our institution.

Among the students on campus was a trailblazer who that year would become the first African American to earn a degree at Washington & Jefferson College: Welcome Turner Jones.

“The class of ’90 is proud of the fact that among its members is the only man of African descent who ever graduated from W&J College,” John Campbell Palmer Jr. wrote in A History of the Class of ’90, published by the class in 1901. “It is still prouder of the fact that Welcome Turner Jones has demonstrated to the world that when he has equal opportunities with his white brother, the [Black] man can be as successful in the profession as the Anglo-Saxon.”

In that first decade following his graduation, Jones attended medical school at Western Reserve University in Cleveland, Ohio, before becoming licensed to practice medicine in Virginia in 1893. In 1894, he established his own practice in Newport News, Virginia, and became a member of the Board of Health of the city, seeing it through a local smallpox epidemic and a yellow fever outbreak.

Jones went on to join forces with three other physicians and establish the first Black hospital for the city in 1905. During World War I, the hospital had a contract with the U.S. Government to treat soldiers affected by the influenza pandemic.

Jones set the precedent for Black students at W&J, laying the foundation for the many impressive contributions to our community and to the world at large from BIPOC students at the College for years to come.

More than 130 years after Jones earned his degree, the students crossing the seal in Old Main today echo his enterprising spirit.

This academic year has presented challenges unlike any other faced by students in our modern era due to the ever-present threat of the global pandemic, and yet these students are undeterred from their goal to substantially contribute to the world in which we live.

The students in the W&J Black Student Union have found opportunities in the past year to showcase their place as campus leaders. In the fall, the organization—led by President Tamia Mickens and Vice President Jasmine Dey—hosted a Celebration of Black Lives on campus in response to horrific national events demonstrating the major racial inequities that persist in our country today.

These students have led meaningful conversations on campus about the Black student experience today and continuously challenged the W&J community to be better—and in doing thus, have made us so.

WASHINGTON (July 15, 2020)—Get comfortable with being uncomfortable. That’s the theme at the heart of Jasmine Dey’s podcast “Cue the Conversation,” a broadcast that so…

WASHINGTON, PA (May 18, 2022)—Three Washington & Jefferson College students have been recognized with traits of a giving heart.