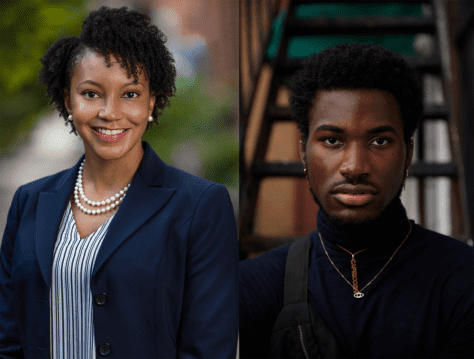 WASHINGTON, PA (February 14, 2022)—This February, Washington & Jefferson College is celebrating Black History Month by continuing our “Then and Now” series, a joint effort with W&J’s Black Student Union (BSU) that recognizes some of our accomplished Black alumni and the current students who are carrying on their legacy. Throughout the month, we’ll share new features showcasing how vital Black contributions are to the success of our institution.

Then: A Driven Dynamo

Before Dr. Charvonne N. Holliday Nworu ’08 arrived at W&J in 2004, she already knew how she would use her collegiate experience to lead society.

An avid reader with an interest in medicine, Holliday Nworu resolved to solve health disparities and improve care for marginalized communities as she searched for post-secondary schools. She decided on W&J and received a Presidential Scholarship for her academic merit. Then she got to work, declaring a biology major in pursuit of a plan to shatter the status quo.

“I was an aspiring women’s health physician at the time,” said Holliday Nworu, who ultimately earned a PhD in Behavioral and Community Health Science from the University of Pittsburgh’s Graduate School of Public Health in an effort to achieve health equity.

Studious and driven, Holliday Nworu was a decorated scholar at W&J, receiving the Gates Millennium Scholarship, the National Science & Mathematics Access to Retain Talent Grant, the Rules, Hughes, Murphy Award, and others. She immersed herself in a litany of co-curricular activities and was swiftly elected to leadership roles with the Matthew Brown Fellowship and Phi Sigma Biological Sciences Honor Society, chosen as a Student Fellow for the W&J College Admission House, and elected President of the Black Student Union (BSU), with the BSU serving a particularly important role in her collegiate career.

“My involvement in the Black Student Union was a cornerstone of my college experience,” Holliday Nworu said, estimating that only 2% of her class was comprised of Black students and that the BSU served as her first social network at W&J. “I found it rewarding to be among other scholars who looked like me and could identify with my experience as a Black woman in America…[and] whose members were productively working to impact our student body and the greater community.”

Her desire to have a larger impact eventually led Holliday Nworu to her current role as an Assistant Professor in the Population, Family, and Reproductive Health Department at the Johns Hopkins Bloomberg School of Public Health (BSPH).

A proud alumna, she continues to grow her legacy at W&J, guest lecturing for several courses in 2019, engaging with current students, and nurturing connections with the individuals who influenced her at W&J.

Sophomore Dylan Joachim has his own plans for forging a better future.

Already an accomplished student, the gender and women’s studies major is also double minoring in communication arts and history. He established himself as a Beta Scholar by maintaining a cumulative grade point average between 3.70 and 3.85. And beyond academics, he is determined to make tolerance the foundation of the next generation.

“I know the benefits of collaboration and cooperating with others, and really being able to respect all sides of a situation,” Joachim said. “Even in my closer, more personal relationships, I’ve learned to be more tolerant of other people, and understand that people have events in their lives that have led them to be who they are, and I have to always respect that.”

“Truthfully, I think the BSU is one of my more meaningful experiences in leadership,” Joachim said. “At every meeting, the BSU tries to maintain a very calm environment where people can proudly be themselves…and we encourage everyone to use their voice as much or as little as they would like during our discussions.”

Driven to help others, he plans to make a plurality of voices heard after his graduation from W&J.

“I’d love to become a civil rights attorney,” Joachim said, adding that he’s looking at law schools in the West. “Because everybody here is such a demonstrated leader, I, by default, am becoming one.”

Not many undergraduate students can say they’ve filed three patents for inventions, worked in labs in France, China, and Australia, and have lined up a...

The Princeton Review highlights colleges with sustainable practices in place, and with programs like W&J’s Environmental Studies (EVS) major that prepares students for employment and...