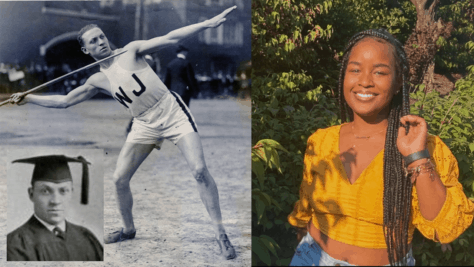 Celebrating W&J’s Black History: Then and Now ft. “The Multi-Hyphenate”

WASHINGTON, PA (Feb. 25, 2021)—During February 2021, Washington & Jefferson College is celebrating Black History Month by recognizing some of our accomplished Black alumni and the current students who are carrying on their legacy today. Each Friday, we’ll share a new feature showcasing how vital Black contributions are to the success of our institution.

THEN: A W&J Legend

There isn’t a student at W&J who isn’t familiar with the legacy of the multi-talented Charles “Pruner” West ’24. The eponymous Charles West Scholars at W&J is a selective program that seeks to educate, engage, and empower Black and African American-identifying students at W&J and serves as an introduction of his impact on the College and the world at large.

West made history as the first African-American quarterback to compete in the Rose Bowl in 1922 in a historic game that would go down as the bowl’s only scoreless tie. In 2017, West was posthumously inducted into the Rose Bowl Hall of Fame at an induction ceremony attended by his daughter, Linda Nickens.

His athletic prowess wasn’t just limited to football, either; West was an accomplished track and field competitor who won the National Collegiate Pentathlon at Penn Relays in 1922 and 1923. West even made the 1924 track Olympic team, though he was unable to compete due to injury.

West earned a spot in Howard University Medical School after graduating from W&J and went on to maintain his own medical practice in Alexandria, Virginia. The Alexandria Urban League recognized him for his community service in 1973, and in 1978 he received a Howard University Medical Alumni Association citation for his years of practice. West also received the W&J Distinguished Service Award in 1978.

“West exemplified the ideal student image that W&J has sought to produce for years—students with intellectual and physical aptitude,” Lynn Kuhn wrote in a Pittsburgh Tribune-Review profile of West.

Like Charles West, Dejah Hall ’21 doesn’t know the meaning of the phrase “down time.”

Dejah is widely involved at the College, balancing a full academic course load as a sociology major and communications minor with a concentration in African American studies alongside her roles as the social media manager for the Communication Arts Department, senior class representative in the Student Government Association, LeMoyne Center volunteer, and member of the mock trial team, Black Student Union, equestrian club, and the National Society for Leadership and Success (NSLS).

Her involvement on campus—and specifically in the Black Student Union—helped Dejah build a home while embracing her identity. The conversations she’s helped lead in the club have helped to bolster inclusivity on campus—an ongoing goal of the College.

“When I first came to W&J I was one of five or so black girls in my graduating class, and I’m not going to lie—coming from such a diverse city like Philadelphia and then experiencing life at a primarily white institution left me with a bit of culture shock. For the first time in my life, I could physically see myself as and feel like a minority,” Dejah said. “When I found BSU, it was like a breath of fresh air. For the first time since I had gotten to school, I didn’t feel alone. After a few meetings I quickly realized that my experience wasn’t a singular one.  BSU gave us a place to really sit and unpack all these feelings we were having and offer advice for each other. We laughed together, we cried together, we felt angry together, we felt joy together, and even if the feeling of relief was only for an hour every other Tuesday, it’s what kept me going in a lot of ways.”

Having the ability to voice her ideas and make changes has given Dejah a feeling of agency she hadn’t felt previously, and the realization that her actions could have a lasting impact. Taking the reins on the Communication Arts social media presence under the direction of Assistant Professor of Communication Stevie Berberick, Ph.D., has allowed Dejah to develop her skills and understand more about herself and her role as a young adult entering the work force. It’s even encouraged her to follow a new path outside of the one she initially envisioned for herself coming to W&J.

“When I first got to school, I was dead set on graduating and going to law school. As I began to grow and learn myself, I found that as much as I loved the legal field I was always being stunted creatively,” she said. “After graduation I really want to go out on a limb and put all my trust and focus into my creative work. My hope is to expand my clientele and manage not only social media pages, but people in the media in general as I help them showcase their best selves. I’ve come to find that my unique mix of knowledge from my sociology major and communications minor have created an amazing foundation to take on this quickly evolving tech world we now live in.”

Two new centers at W&J College will give students a distinctive advantage through customized programs to ensure that they become ethical leaders who are well...