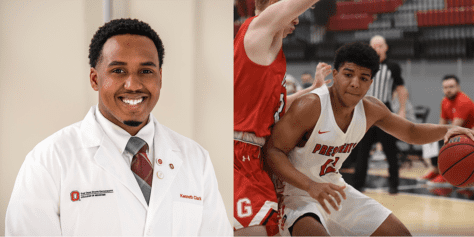 WASHINGTON, PA (March 2, 2022)—This February, Washington & Jefferson College is celebrating Black History Month by continuing our “Then and Now” series, a joint effort with W&J’s Black Student Union (BSU) that recognizes some of our accomplished Black alumni and the current students who are carrying on their legacy. Throughout February, and in its following weeks, we’ll share new features showcasing how vital Black contributions are to the success of our institution.

Then: An Enterprising President

Drawn to the school’s Charles West Scholars program, he chose the College years later on an invitation to join it and aimed simply to grow and mature. But he did far more than that. A biochemistry major set on attending medical school, he dedicated himself to academics and leadership, and in his senior year became W&J’s first Black student body president.

“It’s so important to me not only because of the enjoyment I got carrying out the role, but also for what it meant for W&J at the time,” he said. “Since my presidency, W&J has also had its first Black female student body president, Carmen Carroll.”

But being the first wasn’t always easy.

“I definitely faced my fair share of microaggressions during my time on campus,” Clark, who also served as the BSU’s president said. “The BSU was a safe haven for me and a lot of my friends…[and] the BSU always filled my cup so that I would be able to pour into my other school activities and academic endeavors.”

After graduating, those endeavors included giving back.

“Between undergrad and medical, I worked [as the Assistant Director of Admission] at W&J,” said Clark, noting that he oversaw recruiting for the Charles West Scholars Program. “It is crazy to me that some of the students I recruited during my time in admissions are now some of the leaders in the BSU. That is amazing to see.”

Now in his second year as a medical student at the Ohio State University College of Medicine and serving as his class president, Clark is continuing his W&J legacy as a successful alumnus.

“Upon graduating medical school, I plan on being a culturally competent physician that provides equitable healthcare to my patients,” he said. “I want to get better every day at whatever I choose to do, inside and outside of my profession.”

Charles West Scholar Kyran Mitchell Jr. is setting records of his own.

A junior double majoring in economics and philosophy, the guard/captain on the men’s basketball team posted his third triple-double in a game against Bethany College just weeks ago, becoming one of only two players in NCAA basketball to have three or more triple-doubles this season, and leading the Presidents to the 24-win mark for the first-time in program history.

“It would be really great if we could win a PAC Championship,” said Mitchell, who, along with his team, did just that last Saturday, earning the College its first PAC title since 1994-95. “That’s my main goal while I’m here, and, of course, to do well in school.”

It seems he’s achieving that goal as well.

In addition to being named the PAC SAAC Male Scholar-Athlete of the Month in December of 2021, on Friday, Mitchell was one of five players selected for the District IV 2021-22 Academic All-District Men’s Basketball First Team by the College Sports Information Directors of America (CoSIDA). The selection makes him the first W&J men’s basketball player to earn Academic All-District honors since 2013-14, and just the eighth student-athlete from the men’s basketball team to be recognized by CoSIDA since 1978.

What’s more, he’s done so while serving as the BSU’s treasurer.

“This is my first actual role in some type of club, but it’s a good thing,” Mitchell said. “I’ve become more willing to lead by example than anything…[and] grown in my desire to have more and better relationships with people.”

It’s a desire that extends beyond W&J. Aiming to attend law school and become a sports agent, Mitchell wants to improve relationships and opportunities for athletes well-beyond graduation.

“My ideal situation is to be able to play somewhere and also be able to pursue a law degree,” he said, noting that he has an additional year of eligibility for basketball. “But even if I’m not able to play, I think that I’ll still be in a good situation academically to succeed.”

Brionna Kifer Matt ’09, M.D. became one of her hospital’s key designated resident experts for the duration of the Covid-19 outbreak.