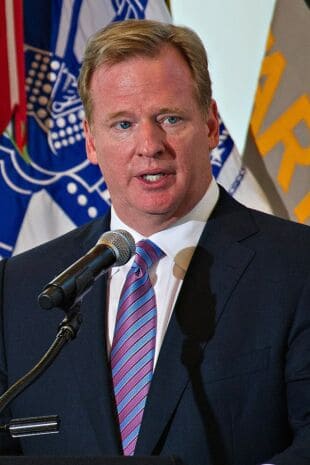 National Football League (NFL) Commissioner Roger Goodell delivers remarks during an event at the U.S. Military Academy at West Point, N.Y., launching an initiative between the Army and the NFL to work to raise awareness about traumatic brain injury Aug. 30, 2012. Goodell and U.S. Army Gen. Raymond T. Odierno, the chief of staff of the Army, jointly signed a letter formalizing the initiative during the event. (U.S. Army photo by Staff Sgt. Teddy Wade/Released)

"My education at W&J taught me how to learn, how to communicate, and how to work with others -- the three most important skills in any job."

When he graduated from W&J, Roger Goodell wrote his father a letter, thanking him for college. In the letter he wrote, “The only thing I want to do in life, other than to be the commissioner of the NFL, is to make you proud.”

Goodell is someone who, in his own words, “just won’t take ‘no’ for an answer.” He wanted to work for the NFL after college, and so he wrote letters to the central office and to each of the 28 teams in hopes of getting an internship. Although many people told him that all his letters would be ignored and he received many rejections, his persistence paid off. He landed a three-month internship in Commissioner Pete Rozelle’s office just a year out of college. And, except for a one-year internship with the New York Jets in 1983, Goodell has been at the league office ever since.

At first, Goodell clipped and copied news articles in the public relations department, but his talents were quickly recognized. By 1987, he was serving as assistant to the president of the American Football Conference and, by 2001, he was appointed as the NFL’s executive vice president and chief operating officer. In the latter position, he played a major role in all aspects of league operations, making him the natural successor to Commissioner Paul Tagliabue in 2006. He says wistfully, “My dad was not alive to see me become commissioner, but I know that, wherever he is, he is smiling.”

As he looks back over his 24-year journey through the National Football League, Goodell attributes much of his success to Washington & Jefferson College. “The first day in Professor Salbach’s economics class he said there would be two hours of homework for each class period. I thought I’d never make it.” However, Goodell stuck with it and found that the challenge was enjoyable. “My education at W&J taught me how to learn, how to communicate, and how to work with others—the three most important skills in any job,” he says.

Explore our directory of Education for a Lifetime!