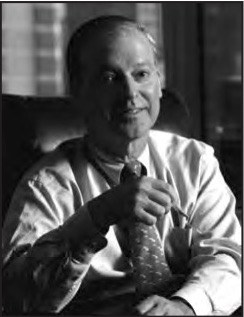 "W&J was exactly what I was looking for."

Washington & Jefferson College’s atmosphere certainly caught John Reed’s eye. He was born in Chicago, the son of an executive with Armour & Co., but his family moved to Argentina when he was six years old. He spent his childhood and teenage years in Brazil and Argentina, graduating from high school there. So in looking for a college, he says, “I was looking for the real America, and I think I found that at W&J.” Having spent so little time in the United States, he did not know what everyday life was like here. By coming to W&J, Reed believes that he not only found a fine liberal arts program, but also began to really experience America.

W&J’s 3-2 engineering program attracted Reed to the College because he felt that it would give him a great mix of liberal arts at W&J and focused study in engineering at Massachusetts Institute of Technology (MIT). “W&J was exactly what I was looking for,” Reed says. One professor that Reed remembers in particular was a religion professor and a minister at a local church who “took the study of the Bible, which did not seem interesting to me at first, and made learning about that subject enjoyable.”

After his graduation, Reed worked for Goodyear Tires but found his true calling several years later when he joined Citicorp. He quickly climbed the ladder, becoming chairman and CEO in 1984, a position he held for more than 14 years. During his leadership of Citicorp, the company grew 12 percent yearly, pushing its value to in excess of $4 billion. Later, when the New York Stock Exchange was facing a host of crises in 2003, he was asked to come out of retirement and serve as interim chairman and CEO, which he did. At the NYSE, he led the push for governance reform, while earning a symbolic salary of only $1 per year.

Explore our directory of Education for a Lifetime!