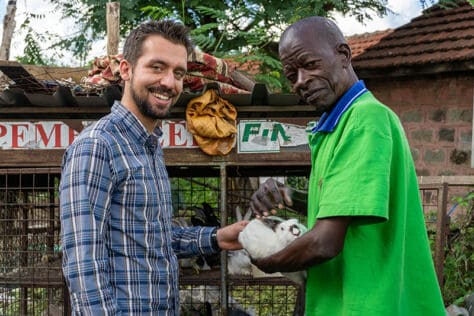 As an Environmental Studies major, Washington & Jefferson College alumnus Jake Meyers ’15 amassed a lifetime of learning experiences from his college research adventures to the Galapagos Islands, South Africa and Cambodia. Those experiences, he says, along with W&J faculty mentors, helped him develop storytelling skills that would enable him to more effectively share his stories—and their impact—with others.

Meyers, graduating this spring with his Master’s degree in Development Practice from the University of Arizona, credits those skills for helping him win a national storytelling competition recently for his video interview with an innovative urban farmer in Nairobi, Kenya, who found a way to raise 600 head of livestock, 500 rabbits, and 150 plant species on just over half an acre of land.

Meyers won the Best Short/Sharable Video award from Planet Forward’s national Storyfest 2020 competition for the short video he created to tell the story of farmer and environmentalist Francis Wachira.

As a grand-prize winner, Meyers will get to join Planet Forward in the near future on a National Geographic expedition to Iceland to explore the island nation’s biodiversity and create stories on how it’s developing environmentally sustainable practices around geothermal energy.

Planet Forward is an organization established at the George Washington University School of Media and Public Affairs’ Center for Innovative Media in 2009 by Emmy Award-winning journalist and former CNN anchor Frank Sesno. The organization promotes the use of storytelling as a tool to foster environmental sustainability and fight climate change.

“In these trying times, we need stories now, more than ever,” said Sesno, chief executive of Planet Forward, in his announcement of this year’s winners. “Through Storyfest—our annual storytelling competition designed to highlight and reward the very best student-told environmental stories—we have found inspiration in both creative solutions and fascinating characters.”

Among them is Wachira, whom Meyers met in the summer of 2019 during an international research experience to support his study of climate change and urban food security.

“Countries like Kenya will need to reimagine their food systems to feed a growing urban population with fewer farmers,” Meyers wrote in an article about his winning video. “As food security concerns grow for the city of Nairobi, farmers like Francis Wachira are transforming urban lots into highly productive green spaces to raise livestock, grow vegetables, and fight climate change.”

Meyers said the art of storytelling is fast becoming an important tool for the likes of environmental and social scientists who advocate for more sustainable practices. Meyers said he learned the art at W&J as he tried to effectively capture and share his international research experiences with his family and friends.

“I practiced how to share my experience and got into the habit of selectively curating my social media platforms,” Meyers said of his summer research experiences at W&J.

Why is storytelling so important to the likes of Meyers and other social scientists?

“International development is rich with 100-page reports,” Meyers said of his field of international development. “Decision-makers rarely have the time or capacity to read through lengthy reports full of facts and figures. So the question is, how can researchers and practitioners turn data into compelling decision-support tools to move the needle on climate change and poverty? You tell the story of one person.

“We must look at storytelling as a tool to incite empathy and get decision-makers and the public to act,” he continued. “It really brings home ‘Who cares?’ to the audience. Through the power of storytelling, all of us have the ability to inspire transformational change to make the world a more sustainable and socially just place.”

WVU and W&J partner up for statistics internship

Rhyan Smith, a graduate student at West Virginia University assisted W&J in gathering and organizing information as part of the College’s accreditation process through the...

The Class of 2017 graduates have departed on their individual journeys beyond Washington & Jefferson College (W&J) and have thanked many supporters, but one sticks…

Alumni Actions: How you can get involved with your alma mater (and help a new generation of students!)

Have you been feeling the post-homecoming slump? We had a great time back in October, but once you’re away from W&J for a few weeks,...