“Everybody” by Branden Jacobs-Jenkins 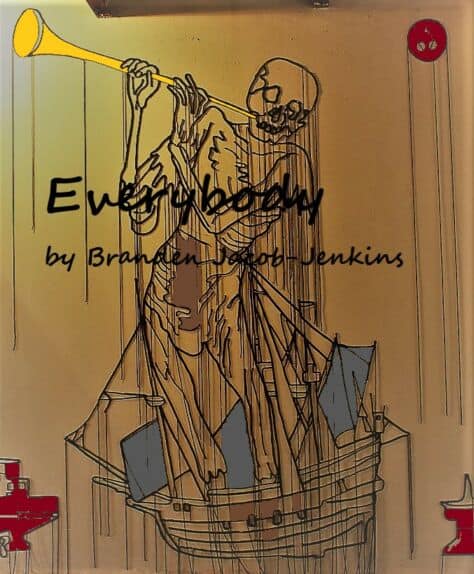 DEATH: “God needs a… report from you. Just like some general sense of your time here and how you spent it, how you lived your life so wrong and why – you know, like a presentation…. I think it’s for internal purposes….”

Everybody, a finalist for the 2018 Pulitzer Prize for drama, is a modern riff on the fifteenth-century morality play Everyman. “Everybody” must go on an allegorical journey for which they seek a companion – from personifications of “Kinship,” “Friendship,” “Strength,” “Beauty” – in the hope that one of them will accompany “Everybody” on their appointment with Death. In the process, they explore the meaning of living.

Guest Director
Carley E. Lyon (née Adams) is a director, actor, and professional nonprofit writer based in Pittsburgh, PA. She graduated from Washington & Jefferson College in 2015 with a Bachelor of Arts in Communication Arts and a Professional Writing Concentration.

Carley made her directing debut in 2015 at W&J with the one-act comedy, “Sometimes You Just Gotta Get in There,” written by fellow alumnus Drew Aloe. It was the first entirely student-run production at W&J in a decade. In 2018, Carley was recruited for Little Lake Theatre Company’s Emerging Director Program in Canonsburg, PA, where she served as dramaturge and assistant director for Tom Stoppard’s Arcadia (dir. Jena Oberg) and assistant director for James Goldman’s The Lion in Winter (dir. Art DeConciliis). In 2019, she made her Pittsburgh directing debut at the Pittsburgh New Works Festival with the one-act black comedy, “Statin Eye-Land Fairy,” by Richard Manley. Most recently, she directed Mrs. Mannerly by Jeffrey Hatcher as part of Little Lake Theatre’s 2021 Main Stage Season.

Carley is excited to bring Everybody to life at Olin Fine Arts Center, the very place where her creative identity was born. Special thanks to the faculty of the Communication Arts Department – both present and retired – for encouraging her to aim ever higher!