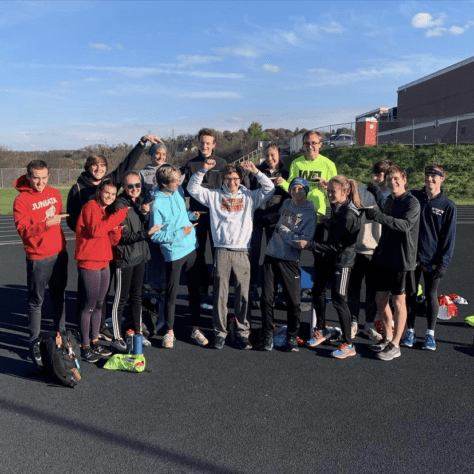 First-year runner sprints to success with support of team

WASHINGTON, PA (February 11, 2022)—First-year track and field athlete Jacob Davis may not be in a race for the presidency yet, but his fast-footed friends are already helping him run.

Interested in studying political science and public policy at W&J, the future presidential hopeful beat his own best running time of 19 minutes in an unofficial 5K last semester, after Head Coach Derek Workman and members of the men and women’s track and field and cross-country teams rallied around the freshman and paced him to a personal recordat 17 minutes and 46 seconds.

“It felt great. It felt amazing,” Davis said, “to be able to do that my first year running at W&J.”

Davis had been working to break 19 minutes in a 5K for more than four years, but he didn’t think he could do it until Workman gave him the extra push.

“I talked to Jacob and I said, ‘If you want to do this, let’s set up a time trial for you, and I’ll let you run a 5K on the track, so that you can get a new personal best time,’” Workman said. “I didn’t want it to affect the rest of the team’s workout while they were training for regionals, but I figured if there was a way to intertwine the two, then I’d be willing to do that. So, I found a way to make that work.”

Making it work meant forming runners into three rotating training groups, and scheduling them to start their workouts at different times so they could pace Davis for four laps on the track before starting their next scheduled mile. But, to Workman’s surprise, his runners changed course.

Rather than using their rest to step back and relax, each group gathered around the track after pacing Davis, and cheered him to a fist-pumping finish.

“It was honestly the most amazing practice I’ve ever been at in my entire life,” Workman, who teaches a “team over me (TOM)” mindset, said. “Everybody was just so invested. It was just so different from anything I’ve seen before.”

Davis agreed, noting that an experience like his is unique to W&J.

“I don’t think I could have done this anywhere else or on any other team,” Davis said. “I definitely think it’s the uncommon integrity mindset. Everybody here is a different level of human being, really.”

As one of those people, Davis is hoping they also make good leaders.

“I want to go into politics and end up being a senator, or, hopefully, cross my fingers, I want to be the president one day,” he said. “Running is something that not everyone can be dedicated to, and just being able to wake up every day and run, and having that grit and determination to do something, will hopefully help me when things get rough on the campaign trail.”

Two teams from W&J have put their skills on display in NCAA competitions.

WASHINGTON, PA (March 2, 2022)—This February, Washington & Jefferson College is celebrating Black History Month by continuing our “Then and Now” series, a joint effort...