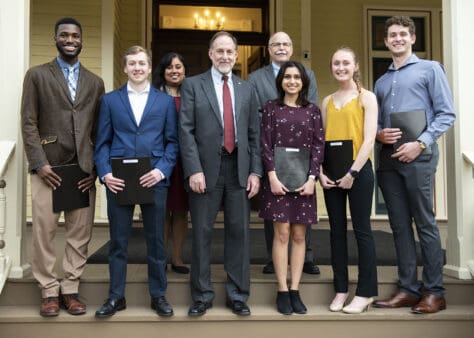 The 2021-2022 recipients are Cassandra Carr, Lisha Chadda, Sean Disbrow, Dylan Joachim, and Gannon Ziviello. Details of the winners are below.

The James Rule (W&J Class of 1898), Howard Hughes (Class of 1911) and Robert Murphy (Class of 1906) Memorial Fund was established in 1987 through the bequest of an anonymous donor and annually provides a monetary award to select students.

Rule was a teacher and principal of several Pittsburgh area high schools and also served for two years as national director of the Junior American Red Cross. He also was deputy director, and later director, of the Pennsylvania Department of Public Instruction, and was superintendent of public instruction for four years. Hughes was the first person from Washington County named to the Pennsylvania Supreme Court, serving from 1943 to 1945. He served for 10 years on the Common Pleas Court of the 27th Judicial District and was solicitor general for the Pennsylvania Railroad Company at the time of his death. Murphy was general secretary and graduate athletic trainer at W&J from 1906 until the time of his death in 1925. Among his duties was recruiting students, and he attracted to W&J outstanding student-athletes such as NFL Hall-of-Famer Wilbur “Pete” Henry and coaches such as John Heisman, for whom the Heisman Trophy is named.

Cassandra Carr
Major: Gender & Women’s Studies
Co-curricular Involvement: W&J Cross Country, SGA Class Representative, Resident Assistant, SAAC
Quote from nominator: “Cassie is an outstanding student-athlete and community leader whose professional goals reflect the record of engagement and community service exemplified by the alumni for whom this award is named.  Cassie is using her studies in Psychology and GWS as a pathway to a career in human advocacy, and I know that no matter where life leads her, she’s going to make a difference.”

Lisha Chadda
Major: Biochemistry (Temple Medical Scholar)
Co-curricular Involvement: W&J Tennis, Neuroscience Club, Resident Assistant, Washington Fellow
Quote from nominator: “Lisha impresses me as a student who fulfills the expectations we have of W&J graduates as articulated in the College’s mission statement. Furthermore, she exhibits the academic, leadership, and character traits that the Rule, Hughes, Murphy Award is intended to recognize.”

Sean Disbrow
Major: Accounting & Business Administration
Co-curricular Involvement: W&J Football, PAC All-Conference, Washington Fellows, SAAC
Quote from nominator: “Sean is a talented student-athlete who has made a significant impact on our football program with his kicking accuracy. He also excels in the classroom, and we are proud of him for earning this honor.”

Dylan Joachim
Major: Gender and Women’s Studies
Co-curricular Involvement: Alpha Tao Omega, BSU Vice-president, Charles West Scholar, Resident Assistant
Quote from nominator: “Dylan Joachim is a strong candidate for this award as he continues to show strong leadership qualities, has high academic achievement, and displays tremendous character. Dylan is humble, kind, and a model citizen of uncommon integrity which are traits all members of our campus community can look to as an example.”

Gannon Ziviello
Major: Physics
Co-curricular Involvement: W&J Cross Country, SGA Class Representative, Resident Assistant, TA Physics Department
Quote from nominator: “Gannon Ziviello is a deserving candidate for this honor because he not only has the academic achievement, leadership skills, and character, but he also has a passion for the W&J community. All of his involvement, from being an RA in a first-year residence hall to being a TA in Physics shows his passion for specifically helping others within the community engage with our vibrant campus.”

WASHINGTON, PA (Jan. 24, 2020)—Between the fall and spring semesters, Washington & Jefferson College (W&J) students find ways to get ahead. During JayTerm, a two-week…