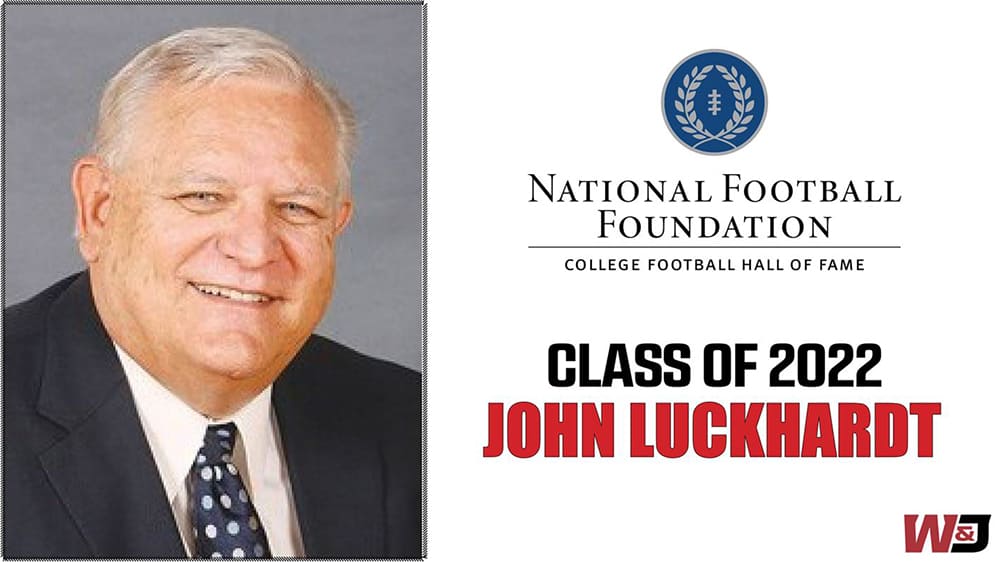 “We are thrilled for Coach Luckhardt. He turned W&J football into an annual NCAA Division III power and helped create so many memorable moments and memories for Washington & Jefferson College students, alumni and fans,” said Scott McGuinness, Director of Athletics at W&J. “Coach Luckhardt’s entry into the College Football Hall of Fame cements his legacy of leadership, mentoring and excellence.”

A stalwart on the Western Pennsylvania football scene for the better part of three decades, Luckhardt turned two programs into perennial national contenders, winning an astounding 76.1 percent of his combined games at Washington & Jefferson and nearby NCAA Division II member California University of Pennsylvania.

In 1982, Luckhardt took over a Washington & Jefferson program that had only produced four winning campaigns in the previous 17 seasons. By 1984, Luckhardt had turned the Presidents into a 9-2 team, winning the team’s first Presidents’ Athletic Conference (PAC) title and earning the school’s first trip to the NCAA Division III playoffs. The program never looked back, amassing winning records every season under his watch, culminating in 1998 with a 137-37-2 record during his 17-year tenure.

Under Luckhardt’s guidance, W&J claimed 13 PAC championships and made 11 appearances in the NCAA Playoffs, including two trips to the Amos Alonzo Stagg Bowl (1992 and 1994). In 1992, he was named the AFCA National Coach of the Year, and CNN named him the Division III Coach of the Year in 1994.

Following his time at W&J, Luckhardt led the program at nearby Cal U from 2002-11. His tenure with the Vulcans witnessed the best 10-year stint in school history, and he exited as the school’s all-time winningest coach with an 88-33 overall record. He led Cal U to the NCAA Division II Semifinals in three consecutive seasons after capturing NCAA Regional titles in 2007, 2008 and 2009. The 2008 season marked the program’s first Pennsylvania State Athletic Conference (PSAC) title since 1987. Two more playoff appearances in his final two years at Cal U gave him five consecutive seasons of double-digit victories and five NCAA Division II Playoff appearances along with seven consecutive PSAC West titles.

A native of Western Pennsylvania, Luckhardt played college football at Purdue for College Football Hall of Fame Coach Jack Mollenkopf, and he was the center on the 1967 Rose Bowl team that beat USC. He began his coaching career at Northern Illinois and then Lehigh. Luckhardt has been inducted into the Pennsylvania Sports; the Washington & Jefferson College Athletics; and the California University of Pennsylvania Athletic halls of fame. From 1994-98, he served on the American Football Coaches Association Board of Directors. From 1996-98, Luckhardt also served as Washington & Jefferson’s Director of Athletics.

The 2022 College Football Hall of Fame Class will officially be inducted during the 64th NFF Annual Awards Dinner on Dec. 6 (location TBD).

In 1922, the team from the PCC — now the Pac 12 Conference — was the undefeated California Bears. And their opponent was now NCAA...