Skip to content
Home / Magazine / “Get Over It Guys, We’re Here” 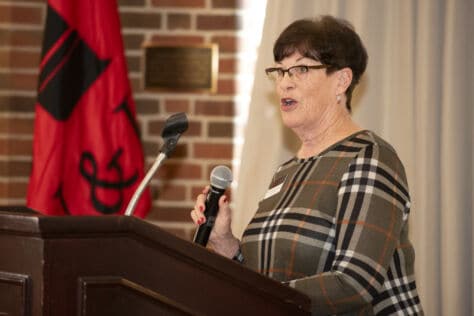 “Get Over It Guys, We’re Here”

Susan Kepler ’74 didn’t let a big “Go home, co-eds!” sign, which hung from a building across from her new dorm, scare her away. In 1970, Kepler was among the first female students on campus helping to transform W&J into a co-ed institution after 189 years as a male-only school.

On the contrary, she says, her pioneering co-ed experience actually prepared her well to take on a 21-year career as an officer in the male-dominated U.S. Army. And that same experience would leave her with an indelible fondness for the College that would draw this now-retired lieutenant colonel back to Washington, Pa., as an employee for nearly 27 years.

Kepler retired from W&J this past November, most recently serving as a major gifts officer.

Kepler grew up on a farm near Avella, Pa., in a family with a long military history. She originally set her sights on Penn State University, particularly given her involvement in the 4-H Club growing up. But in 1970, the school’s main campus was accepting only military veterans. So she considered other co-ed colleges and universities and landed at W&J.

“It was a growing experience for everybody – a change,” Kepler says, looking at attending W&J in 1970. “In the early years, we had to go above and beyond, but it was like, ‘Get over it, guys, we’re here.’

“I appreciate that we broke a huge tradition,” she adds. “It took time because it was a huge change. We worked hard. I always just took it as a challenge.”

Apparently, so did the women of what then was called Chatham College, an all-female school that previously would collaborate with W&J when it came to Homecoming and other co-ed events. Kepler says she remembers a big note from Chatham students that was pinned to a bulletin board in the common area of her dorm.

According to Kepler, it stated: “You can have them during the week, but on the weekend, they’re ours,” referring to the men of W&J, of course.

“It didn’t really bother me,” she says of being part of the College’s first co-ed class. “The only thing that bothered me was [the College administration] treated us as little girls. They were very protective of us.”

Still, Kepler says, the co-ed challenge helped to strengthen her resolve – which she needed when she decided to apply for a direct commission into the U.S. Army as an officer in 1973, while still in school. She accepted the commission as the “Army didn’t have enough men to fill positions because of the [Vietnam] war,” Kepler says, and the Army’s ROTC program at local colleges wouldn’t accept women until 1976.

Kepler says her big turning point in the Army came when she and a group of women soldiers were training on an Arizona mountain. Some struggled to keep up. That’s when Kepler says she stepped up and declared, “Pick up your gun and suck it up.”

Her two-year commission turned into a 21-year career in military intelligence, with stints in 17 different locations, including Alaska and, finally, Virginia. She retired as a lieutenant colonel in 1993.

That’s when she had an opportunity to come back to Washington, Pa., and work for her alma mater as the assistant director of development and director of alumni operations.

Along the way, Kepler also served on the committee that commissioned the public art sculpture “1970” in 2014 to commemorate the year W&J went co-ed – and recognize those like her who enabled that transformation. After almost three decades of working at W&J, she retired this past November.

“My years at W&J have been an absolute joy,” Kepler says. “I will miss it.”

At Washington & Jefferson College, Samuel Florentino '18 supplemented his traditional science and lab courses with religious studies as he planned a career in medicine.