Home / W&J News / Going Underground: Nathan Law returns to W&J Symposium on Democracy to talk about Hong Kong updates, his exile, and the next steps for the Umbrella Movement 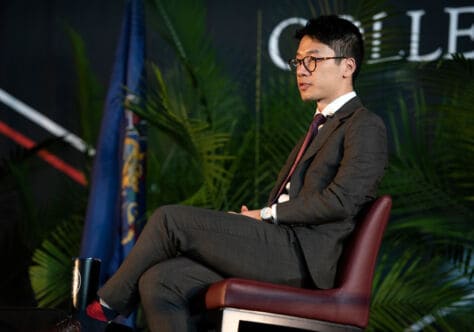 Going Underground: Nathan Law returns to W&J Symposium on Democracy to talk about Hong Kong updates, his exile, and the next steps for the Umbrella Movement

In his second appearance at Washington & Jefferson College’s annual Symposium on Democracy, activist Nathan Law noted some of the changes that have taken place in Hong Kong and in the world since his 2020 talk—global pandemic notwithstanding.

“Last year, I came to W&J’s campus as a graduate student at Yale University. After I finished up my course work, I came back to Hong Kong. At that point, I wanted to run for office and become a legislator again, but the National Security Bill passed before the election,” Law said, referencing a restrictive and purposefully vague piece of legislation that gives Beijing massive control over Hong Kong and that effectively curtails protest and free speech.

“I had a tough decision to make: to stay or to flee,” Law continued. “I’ve been to jail. I’ve been doing a lot of advocacy raising awareness of our work for democracy while I was at Yale. I became an easy target under the National Security Bill, so I made the difficult choice to leave in order to preserve the voice of Hong Kong.”

Law speaking from his current home in London, UK, shared that this choice has cast him into exile from his native Hong Kong; if he returns, he’s likely to face immediate detention and potentially years of imprisonment. It’s also forced him to cut ties with family members and any of his activist connections remaining in Hong Kong, as contact with Law could put them at risk of prosecution.

It’s a dangerous step that has forced the Umbrella Movement to go underground and find new ways to fight for freedoms, and more than 100 citizens have already been arrested for supposedly violating the bill—with more than 50 of those being democratic politicians and activists for participating in a parliamentarian election. Law stated that the congressmen involved will be charged with a secession crime.

“The abuse of the concept of national security took place in Hong Kong and became very convenient for the government to conduct suppression,” Law said. “We’ve seen the continuous erosion of democracy in the past few decades and on the contrary, the rise of authoritarianism. We haven’t been holding the authoritarian regime accountable and they’ve been acting ruthlessly….without any repercussion from the international community.”

It’s been Law’s goal in exile to raise awareness of the situation in China and rally international support to fight the oppression in Hong Kong. He asserted that this isn’t just a Chinese or a Hong Kong problem—but a global issue as it presents an imminent threat to democratic governments everywhere. The authoritarian leaders are coming together, Law said, and if the democratic leaders do not do the same to take a stand against authoritarianism, they have already lost.

But just because the movement must change shape doesn’t mean it’s finished. Law considered a new take on the Umbrella Movement philosophy to “be water,” and shared that this is just one moment in an ongoing fight for human rights.

“We talk about not being stuck in one form of protest and being fluid in our strategy. We can be air, we can be mis, we can be water, we can be ice. For now, the movement is indeed in the low tides—pressure from the government is massive, and indeed in the middle of a pandemic the people are reluctant to gather. But they are still active and expressing our message in more subtle and artistic ways,” Law said. “The tides will change again, and I believe democracy will prevail. It just needs to be a consolidated effort.”

How can we make this relevant to students or give them information that will help them as they continue to develop?