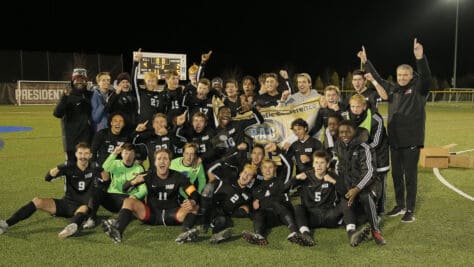 The Presidents compiled a 12-8-2 overall record, which included a 9-0-1 record against conference competition.

The Presidents placed a league-high eight players on the PAC all-conference teams.

Alvaro Viadas ’23 took home PAC Newcomer of the Year honors and 29th-year head coach Ian McDonald was named PAC Coach of the Year for the fifth time in his career.

Viadas and Dylan Mayanja ’23 were both named First Team All-PAC.

Viadas, an exchange student from Spain, and Mayanja paced the conference’s most potent offense. Both players tallied 10 goals, four assists and 24 points apiece. The duo tied for first in the PAC in goals, second in points and eighth in assists.

W&J ended its season in the NCAA’s First Round, when it suffered a 2-0 loss to No. 7 ranked John Carroll University.