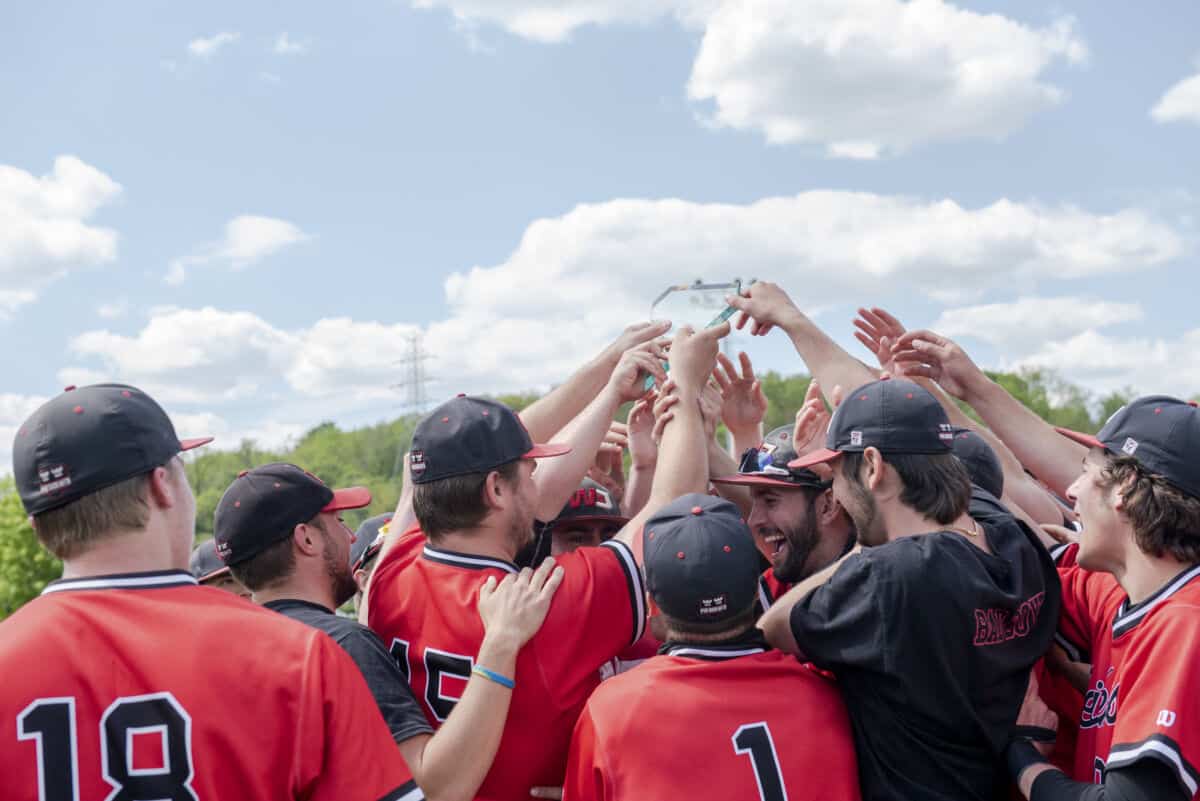 In sports, seasons are often described as a marathon, not a sprint.

Because of the COVID-19 pandemic and subsequent adjustments, that thought was turned on its head. The W&J Department of Athletics saw 22 teams complete varsity seasons during a 102-day span this spring.

The first PAC title was claimed a month later when freshman diver Taylor Weyrich ’24, earned Women’s Diver of the Year honors at the annual PAC Swimming & Diving Championships March 3. Weyrich finished first on the one-meter board and third on the three-meter dives despite never previously competing in that event.

“Words cannot describe the excitement I felt, not only to be able to compete again after not being able to train in a pool for a year, but to actually have the honor of receiving the PAC Diver of the Year award,” Weyrich said. “I could not have done that without the support of my team and my coaches.”

The men’s soccer program earned its second straight PAC title with a 2-1 with over Westminster College at Alexandre Stadium. Soccer, a sport that usually starts practices in August and concludes its season in November, saw its conference champion crowned April 30.

Just hours earlier, Victoria Koeck ’23 captured the PAC title in the High Jump at the PAC Outdoor Track & Field Championships. Koeck, a member of the women’s basketball team, took home the gold in her collegiate track & field debut. Koeck was one of seven PAC individual titles for the track & field program.

A day later, the women’s lacrosse team celebrated its first PAC title and third overall conference championship, with an 18-3 victory over Thiel College at Alexandre Stadium. The historic season ended a few weeks later with an appearance in the NCAA Tournament’s Third Round, as the program advanced to the Sweet 16 for the first time in school history.

The semester was capped at Ross Memorial Park on May 15 with the baseball team’s 13th PAC title. The championship was one to savor for 19th-year head coach Jeff Mountain. The baseball team was the last W&J athletics program to compete before the pandemic brought things to a halt in mid-March 2020. The baseball team finished 2021 with a 37-3 overall record, the third most wins in a single season in school history.

“We never really expected to have any sense of normalcy during the entire 2020-21 school year, but once competition started in March, it did feel like a (mostly) normal year for our student-athletes,” Mountain said. “Given everything that our players have gone through, and the sacrifices they’ve made, I would be willing to bet that this year’s PAC title was extra special to them.”

“I couldn’t be prouder of the total team effort that was displayed during the spring 2021 semester,” said Director of Athletics Scott McGuinness. “President Knapp and Dean Eva were influential and supportive, the entire athletic department – coaches and staff – gave everything they had and the student-athletes abided by the policies needed to ensure a safe and healthy athletic environment. There were many stressful moments, but seeing the smiles on the student-athletes’ faces after triumphant moments made everything worthwhile.”

The ability to complete these seasons was made possible by numerous individuals who worked diligently and remained light on their feet throughout the semester. Director of Athletics Scott McGuinness expresses his gratitude to this spring’s many contributors:

“On certain weekend dates, we had more than ten W&J teams in action, yet because of quality coaches and trustworthy support staff members, we operated as we would in a normal year.

Our support staff are the unsung heroes of the department and that showed more than ever this spring. Our sports medicine team (Mike Lesako, Mark Lesako, Angelica Sabatini, and MK Schickel) and sports information team (Aaron Thompson and Andy Stanko) work extremely hard each year and we asked even more of them this spring. They rose to the occasion. Without their care and expertise, we would not have been able to provide safe student-athlete experiences and the ability for many at home to watch and follow W&J during a pandemic.

We also can’t thank our student work study crew enough. We relied on them to serve as the gameday crews more than a typical year and they acted like true professionals.

Finally, with the established NCAA Covid-19 testing protocols, nurse Heidi Ryan was our point person for communication throughout the campus testing process. Heidi’s work was invaluable to our athletic department.”