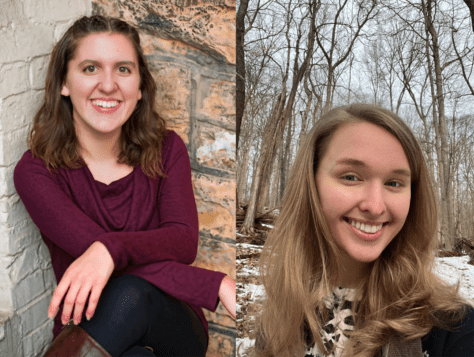 Both German majors, Luttringer and Troesch recently received study abroad scholarships from the national German honor society, Delta Phi Alpha (DPA), and, as two of only five awardees, will spend the Fall 2022 semester learning in Lüneburg.

“It’s a smaller city that’s linked to larger travel hubs,” said Luttringer, who is also a mathematics major, a Washington Fellow, and a tutor with the American Association of Teachers of German’s SPARK for German program. “So, I will really be able to learn the German culture, having the ability to access these larger cities.”

Troesch, a German and biology double-major, German PAL tutor, and leader in German Club, agreed that access to larger cities will expand her experience, but added that Lüneburg itself may provide a crash-course on culture.

“It is just such a beautiful little town,” she said. “I love small towns! They seem to be much more immersive, and they feel like home, really.”

Of course, Luttringer and Troesch are making the transcontinental trek to lavish more than just the local color. As part of the University Studies Abroad Consortium (USAC), they will take a variety of courses on German culture, literature, history, and composition at Leuphana University Lüneburg.

Though the German university is far from their Pennsylvania college, both students said W&J has made their journey the school possible, mostly through the work of professors.

“The German professors here at W&J are some of the best people you will ever meet, and they constantly go out of their way to make sure we succeed,” Troesch said, noting that German professors made both she and Luttringer aware of the DPA scholarships. “Dr. Michael Shaughnessy, Dr. Judith Atzler, and Professor Cathy Altmeyer have done an excellent job preparing me for this opportunity, and just being one out of five picked for this national scholarship…really makes me want to make the German Department proud.”

“I am very grateful,” she said. “Dr. Shaughnessy was the first German professor I had a class with at W&J, and he was the reason I became a German major. He saw more potential in my abilities, when it came to learning and using the German language, than I ever did myself.”

Filled with quiet confidence, Luttringer and Troesch are excited for their adventures ahead—even those beyond Lüneburg.

Following graduation, Luttringer plants to apply for a Fulbright grant to teach English in a German-speaking country, while Troesch plans to pursue a career in wildlife care and conservation.

“I have a passion for communicating science to the public,” Troesch said, “and would love to connect Germany with the United States on important scientific topics.”

Founded in 1926, The National German Honor Society, Delta Phi Alpha, seeks to recognize excellence in the study of German and to provide an incentive for higher scholarship. The Society aims to promote the study of the German language, literature and civilization and endeavors to emphasize those aspects of German life and culture which are of universal value and which contribute to humanity’s eternal search for peace and truth.

The Fall/Winter German Study Abroad Scholarship is open to members of Delta Phi Alpha who plan to study abroad in a German-speaking country during a fall/winter semester. Preference is given to applicants who demonstrate the want to promote the advanced use of the German language, whose study abroad program is of six weeks or more, and who incorporate the study abroad experience into their major and/or career goals.

For the second year in a row, a W&J student has won a scholarship from the German American Business Circle of Pittsburgh.

Making adjustments: How getting involved helped one student cope with culture shock

Coming to Washington & Jefferson College (W&J) from a mostly-black and Hispanic neighborhood on the north side of Houston, Texas, communication arts major Darious Singleton...