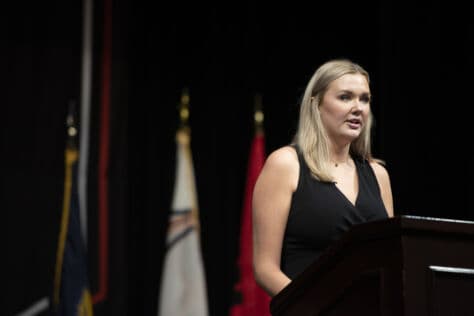 Opening doors in student government, then and now

The 50th anniversary of Washington & Jefferson College’s transformation to co-education has not been lost on Cathryn Halie Hess ’21.

As the current president of W&J’s Student Government Association (SGA), Hess acknowledges the roles of other women before her who opened doors for female student leaders.

“W&J has a long history, and remembering that women have only been a part of it for such a short amount of time is somewhat surreal,” Hess says of the 50th anniversary of co-education. “I have been lucky to have a lot of women in student leadership roles before me and who have mentored me during my time here. To think of the women who didn’t have that experience, but instead created those opportunities for us many years later, is amazing.”

Hess joined the SGA as a freshman when she was elected a freshman class representative, followed by her election as executive board secretary and later as vice president before earning the presidential role.

“I had a lot of great mentors and role models to help me achieve this,” she says. “Our past two presidents also were women, and they really helped me and prepared me for what to expect.”

The first woman to take on the SGA president role and open such doors for future leaders such as Hess was Penny Davis Vaccariello ’88 – 18 years after W&J became a co-ed school. Vaccariello earned a business degree in human resource management and labor relations and married fellow alumnus Leonard Vaccariello ’88 (“Penny and Lenny,” she laughs) before moving to Long Island, where they continue to own and run a real estate management company.

Vaccariello credits Cynthia Hendricks, assistant dean of students at W&J at the time, for getting her involved in the SGA.

“She was a real catalyst and got me involved in student leadership,” Vaccariello says of Hendricks.

“I was a little farm girl (from Galley, Pa.,) and more on the shy side. I met her early on. I had been a nervous wreck the first time I had to give a speech, and I think she gave me more confidence.”

Even 18 years after it began, the co-ed transformation still was taking place, Vaccariello says.

“It was still a man’s world then, but I didn’t feel that way when I was there,” she says. “Most of the women at W&J were go-getters. It was a wonderful experience.”

Hess, a history major, with her sights set on teaching and educational administration, says the current SGA is “relatively even in representation” when it comes to gender, and includes non-binary members.

“I think that is important to acknowledge too,” she says, “because, not only have we created a platform for women in the last 50 years, but also a platform for all identities…W&J is a unique college with exceptional opportunities.”

W&J staff members are taking the Ice Bucket Challenge and making a difference for ALS research and support.