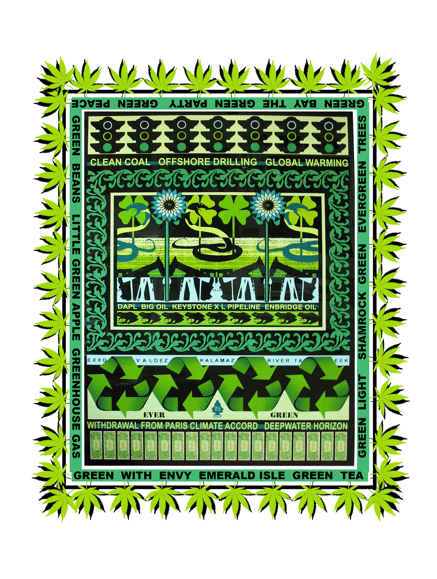 WASHINGTON, PA (Oct. 25, 2019)—Margi Weir’s art exhibit Bearing Witness opens Friday, Oct. 25, at 6 p.m. in Washington & Jefferson College’s (W&J) Olin Fine Art Gallery, featuring an artist talk with Weir where she will discuss her interest in politics and its influence on her work.

Weir’s Bearing Witness includes previous work from her project The Politics of Hue, which she began in 2017 after noting cultural and societal divisions in the United States following the 2016 presidential election. Bearing Witness also includes work she crafted starting in 2014 after she lost two friends to gun violence, as well as new works she has made in response to the separation of refugee children and their parents at our southern border.

“It is often the only way that I can come to terms with things that anger me or frighten me. I have become so horrified by the level of anger and division in this country that I must take a look at it through making work about it,” Weir said in her artist statement.

In addition to her work as a studio artist, Weir is an Associate Professor of painting and drawing at Wayne State University in Detroit, Mich.

Bearing Witness will be on campus through November 22 and is free and open to the public.

Teaching 9/11: A Historical Event and a Lived Experience for Today’s Students

September 11, 2001 is both a historical event and a lived experience for today's college students.

WASHINGTON, PA (Jan. 2, 2020)—Elements of Southwestern Pennsylvania nature became music compositions this fall, with the help of technology and a class of creative Washington…