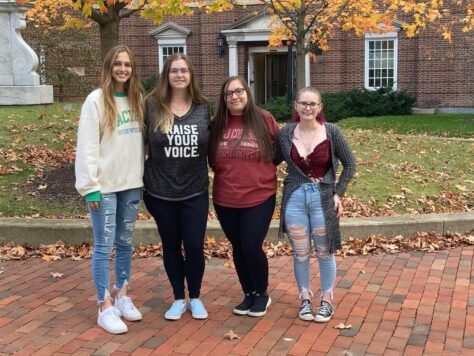 WASHINGTON, PA (October 29, 2021)—Being a President just got a little bit more prestigious.

The convention, a massive academic event to be held in San Francisco this February, is typically attended by thousands of industry learners and leaders, and these students will soon join decades of practiced social and psychological experts in the ranks of its presenters.

“It’s going to be a great experience,” Ghion said, echoing Dr. Kevin Carriere, the assistant professor in the Department of Psychology who worked with Ghion and the others and encouraged them to apply.

Her research, “I Think They Think We’re All Crazy: Breaking Meta-perceptions Builds Paths to Reconciliation,” investigates meta-perceptions (how individuals perceive themselves to be perceived by others) based on political comments and cues, and how those meta-perceptions effect behavior. It’s an area of research Sullivan, a dual Psychology and Gender & Women’s Studies major, also found intriguing.

Her project, “The Impact of Negative Meta-Perceptions on Political Polarization in the United States,” similarly explores the accuracy of political meta-perceptions and the role they play in political polarization and toxicity.

But not all of the accepted research is related.

Will, a Business and Psychology double-major, took her study in a completely different direction, combining her academic interests to examine how consumers react to companies that take stances on social issues or engage in performative activism (faux activism engineered to increase capital gains) for her project, “Ally See or Ally Do: Rewarding Corporate Responsibility.”

Geedy-Gill, a dual Spanish and Psychology major, also merged her areas of study for her project, “The Promise of Security: Restricting Rights Based on Threat and Group Membership,” which assays how willing individuals are to restrict the rights of others based on immigration and citizenship statuses.

Though the group is collectively feeling a bit of nervousness, they’re also confident that W&J has them well-prepared to present.

“At W&J, a lot of the professors include an element of public speaking in their classes…and I think having that experience has really helped with this,” Will said.

“It’s really the professors,” she said. “They make you feel so comfortable.”