There’s no place like home: Matthew Rudzki ’08 serves his hometown as mayor

Many W&J alumni go above and beyond to make a difference in their communities, and Matthew Rudzki ’08 is no exception. He started his first term as an elected official in his hometown at age 24, before he graduated from Duquesne University School of Law.

Rudzki now serves as the mayor of his hometown of Sharpsburg, Pa., and is one of the youngest mayors in the Pittsburgh area. He was elected in 2017 after serving on the Borough Council from 2011 until sworn in as mayor in January 2018, where he estimates there was at least a 30-year age gap between him and his fellow councilmembers. 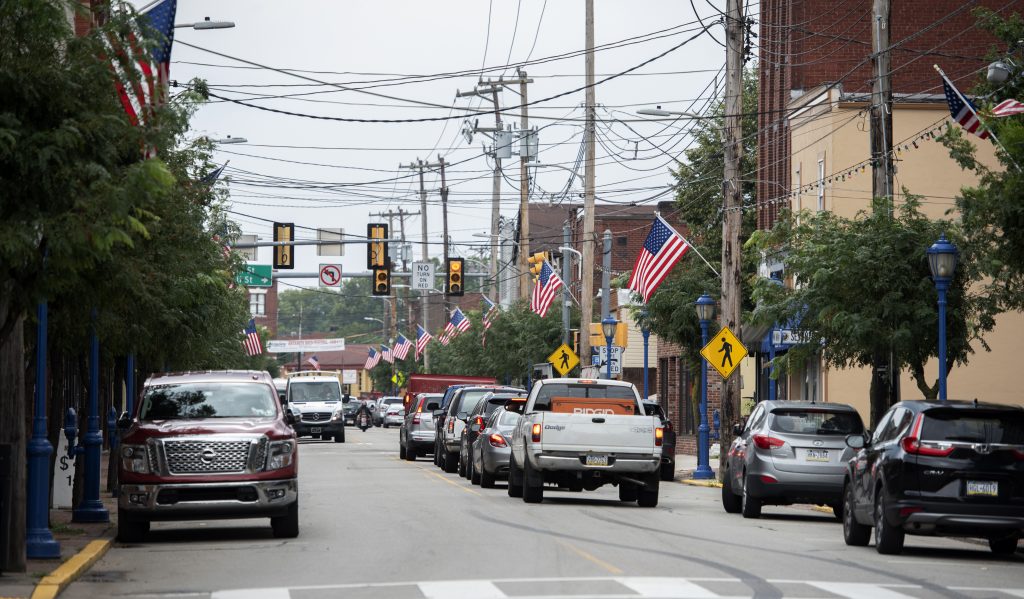 “I love my community and I love giving back to my community,” Rudzki said. “Sharpsburg has shaped me and my family.”

Rudzki’s desire to stay close to home led the history and German double major to W&J, but a chance encounter freshman year also led him to spend time abroad.

After performing well on the German entrance exam, Professor of Modern Languages Mike Shaugnessy, Ph.D., placed Rudzki in a 200-level German class his freshman year. While Rudzki had intended to take German eventually, Shaugnessy’s early involvement led Rudzki to choose a German major and spend a semester in Cologne.

Rudzki is grateful for his Freshman Forum advisor Professor of Computing and Information Studies Charles Hannon, Ph.D., and to Shaugnessy for taking an interest and making time to seek him out.

“It’s the one-on-one contact you might not get at a bigger school,” Rudzki said. “It was a life-changing moment.”

During his senior year, Rudzki applied to law schools and to a Fulbright fellowship in Austria with encouragement from Joseph Moser, Ph.D., an assistant professor who taught German at W&J from 2002-2012. He was accepted to both, and deferred law school for a year to have another chance to gain valuable experiences abroad.

He spent another three summers in Europe while in law school, returning to Cologne and traveling while establishing a continental study of European law while working for one of his professors.

In addition to his European travels, Rudzki also took part in an intersession trip with Professor of Political Science Buba Misawa, Ph.D., to Senegal and The Gambia.

While he enjoyed his time abroad, his heart never strayed far from his hometown. International travel helped shape his world view, but it also reminded him of his goals to improve his own community.

“It makes you aware of how other people live and of your surroundings at home,” Rudzki said. “You can apply the ideas and concepts that work well elsewhere in most communities.” 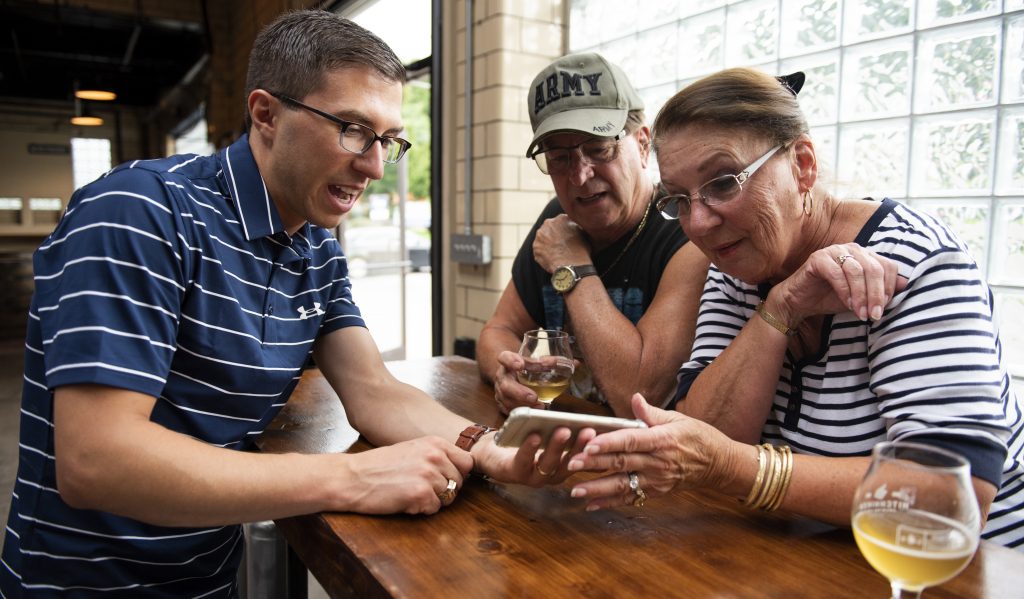 He now resides in Sharpsburg with his wife, Bridget, and is working to make the Borough a place that the couple, as well as a new generation of residents, can enjoy for years to come.

Bridget moved to Pittsburgh from Ohio in 2011 and works as a nurse practitioner at UPMC Shadyside Hospital. She initially had mixed feelings about Sharpsburg which, like much of Pittsburgh, stagnated after the closing of mills in the 1970s and 1980s. But over the last few years, Sharpsburg has benefited from an influx of new businesses downtown, its proximity to the thriving Lawrenceville area, a riverfront location in a good school district, and – at least for now – its affordability. She now enjoys seeing the evolution and adding her thoughts to the conversations about development.

While grabbing a beer at Dancing Gnome Brewery in downtown Sharpsburg, Rudzki chats with the owner about the mural being painted on the exterior of the building, exchanges pleasantries with a few of the local personalities, and catches up with his former elementary school teacher,
who owns an art gallery and community gathering space down the street. He enjoys the daily interactions with people he has known all of his life, but Rudzki is also pleasantly surprised at the amount of people he doesn’t know who are appearing with increasing frequency in the town of 3,500.

“Three years ago, only a dedicated few believed this was possible,” Rudzki said of the increase in new businesses and new residents.

Dancing Gnome was one of the first businesses to move into downtown three years ago. As the brewery’s reputation grows, it continues to attract outsiders to the streets of Sharpsburg. Hitchhiker Brewery, just a few blocks away, has its own growing reputation that also compels visitors to get off at the Sharpsburg exit on PA 28.

Grants at the local, state, and federal levels of more than $6.5 million since 2016 have allowed for many other improvements in the Borough. These include a library renovation, updates to the riverfront park, creating a gateway portal for the town, property acquisition, and the reduction of blighted properties from 200 to less than 20. 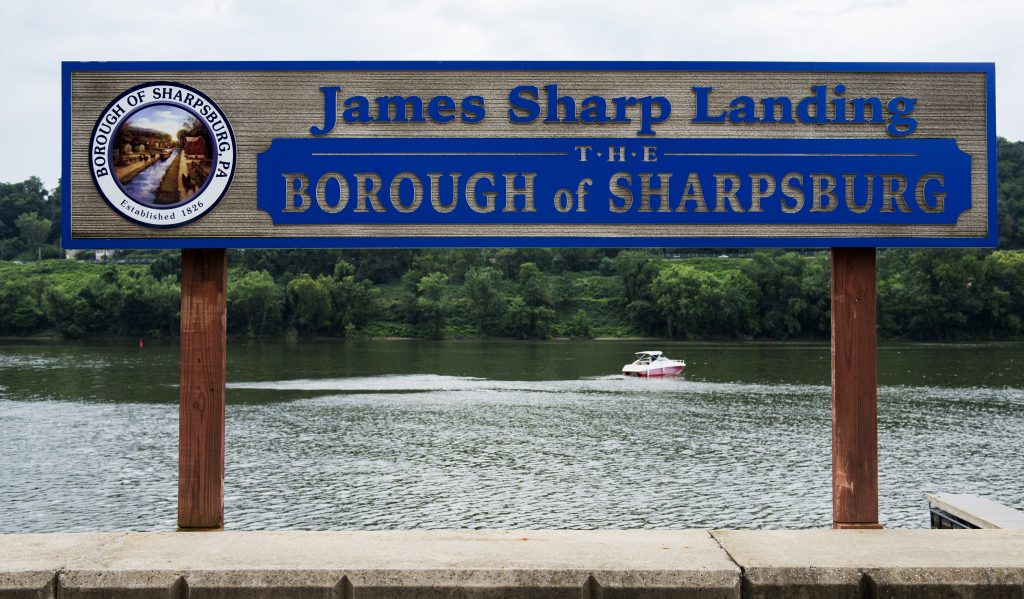 “It gives people a sense of pride and a sense of place and draws visitors,” Rudzki said of the new gateway portal and additional revitalization. While this attracts younger residents, he notes that “the lifetime residents are buying into it and embracing the town it was before.”

In his last year as a Councilman, Rudzki introduced legislation that was passed by Council to set a target for Sharpsburg to become a Sustainable Pennsylvania Platinum Certified Community. To earn this distinction, communities in Pennsylvania must adopt further policies and practices
to save money, conserve resources, and protect the environment. He also introduced resolutions creating the Sharpsburg Environmental Advisory Council and Historical Commission, and supported a Complete Streets bill in order to make Sharpsburg a more pedestrian-friendly community. For these initiatives, the Pennsylvania Department of Community and Economic Development awarded Rudzki the Governor’s Award for Local Government Excellence earlier this year at the Governor’s Mansion in Harrisburg.

Since becoming mayor, Rudzki has spearheaded talks between neighboring communities that led to four municipalities entering into an agreement with the state to undergo a police regionalization feasibility study. He emphasizes a community-oriented policing style within the Borough and hosts Coffee with a Cop events for residents.

Recently, he helped guide the town through two devastating floods in a three-day span by coordinating with first-responders and public works departments throughout the region and using social media to keep residents informed.

Rudzki also collaborates with three other millennial mayors from Southwestern Pennsylvania. The group shares ideas on governance, hosts events together, encourages and endorses other young political candidates, and uses their voices to effect change at the local, state, and federal levels.

Rudzki’s passion for the place that molded him and his family are what drive him, and what prompted his election.

“Residents were looking for a fresh face and a fresh approach to old problems,” he said. “They saw how committed I was to the community.”

Rudzki balances his mayoral duties as an attorney at Giuffre Law Office in Aspinwall, Pa., where he has been working full-time since he graduated from law school and passed the bar exam in 2013. 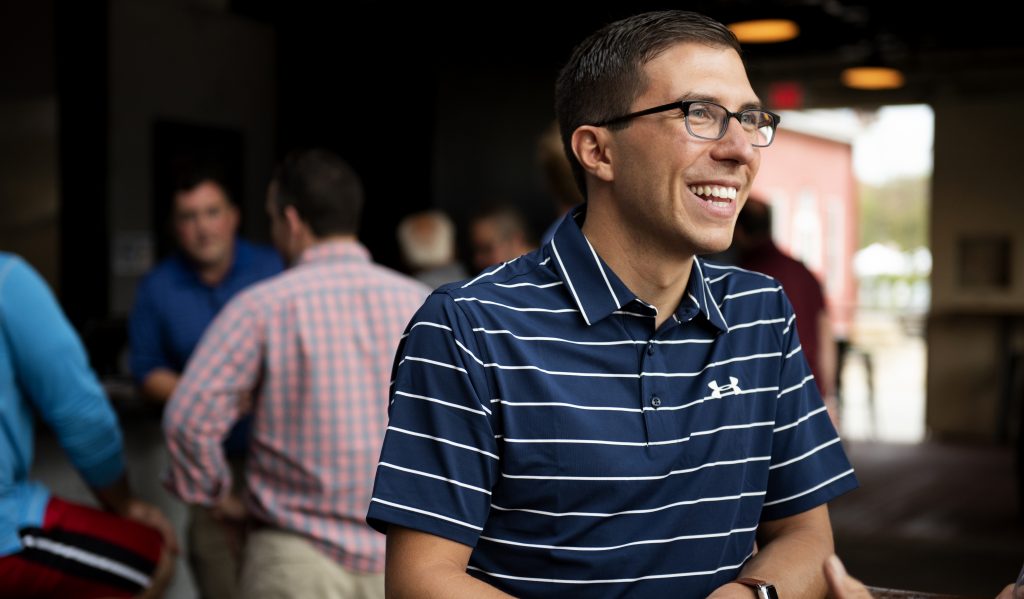 “It’s like he has two full-time jobs,” Bridget said about her husband.

Even while walking down the street, Rudzki remains alert to see if he recognizes anyone and keeps an eye out for any new developments. As he stops to remove a piece of trash from the sidewalk, his level of dedication to making Sharpsburg a better place is apparent.

Whether it’s the addition of solar panels on the library, a new streetscape on Main Street, or a new coffee shop or winery, Rudzki is enthusiastic to discuss any topics related to the 23 blocks that comprise his Borough.

“Sharpsburg has always been my home and will always be my home,” Rudzki said.

Exhibiting Excellence: W&J students hit it out of the park with exhibit for Flight 93 National Memorial

Creating a museum exhibit for a national audience isn’t something most undergraduates have the opportunity to do, but nine W&J history students had that chance last spring and attended the debut of their exhibit, “Down but not Out: Baseball after September 11, 2001,” at the Flight 93 National Memorial in April 2018. Watch the video from the exhibit’s debut. A visit years earlier to the Flight 93 National Memorial started a conversation between Assistant Professor…

Above & Beyond: Young alumni explore their passions and find ways to create change

These four W&J young alumni are making a difference in the Pittsburgh area and beyond. Find out how they are reaping the benefits of a liberal arts education and succeeding in their careers, while still finding time to give back to their alma mater. Read more about their stories and how they have taken their education and applied it to life after college. Matthew Rudzki ’08 Many W&J alumni go above and beyond to make…

On a cold Friday night in February, Nico’Lee Biddle ’12, John Frazier ’12, Rachel Mastromarino ’10, and Matthew Rudzki ’08 returned to their alma mater to share their journeys of discovery, scholarship, and success with prospective students. While what drew them to the College differed, the group was united in their appreciation for the experiences they had at W&J that allowed them to create their own paths after college. The lessons they learned on campus…

Although Rachel Mastromarino ’10 considered a career in teaching, her interest in English and art led her to the museums of London where she found her future profession. A drawing course with Professor of Art Patrick Schmidt her freshman year led to a second art course, after which Schmidt encouraged her to pursue the major. While she had already declared majors in English and studio art before an intersession trip to London, the experience allowed…