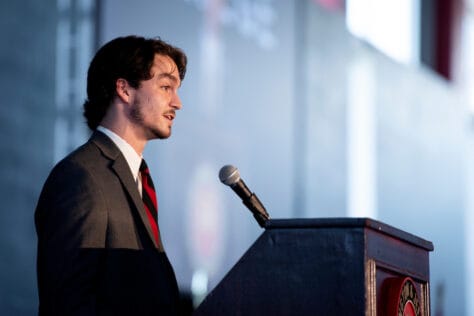 Elected to the role in March of 2021, the history major, rapidly approaching his May 21 commencement, is reflecting on his year of service, and allotting lessons for W&J’s future student leaders.

“For a year, I’ve been the president of an organization that’s just meant to amplify voices,” Leathers said, “and the thing I’m probably most proud of is that it’s working without hiccups. It’s really functioning as an organization where the representatives have a lot of power.”

That power, according to Eva Chatterjee-Sutton, the vice president of Student Life and dean of students, has been put to good use.

“SGA has done a tremendous amount of work this year,” she said. “The assembly has been thoughtful, deliberative, intentional, and respectful in their work. As such, they have forwarded many important projects and decisions.”

Though the group has indeed passed many bills, for Leathers, the unanimous votes to make homecoming court more inclusive by substituting the traditional king and queen for presidents, and to alter the wording on the war monument outside of the John A. Swanson Science Center, stand out.

“It’s kind of strange because everything is put through with representatives, and we, as an executive board, just carry it out,” Leathers said. “So, I haven’t actually voted on a single thing this year, but I was really impressed with the ability of a group that disagrees on a lot of things to come together on certain issues.”

Chatterjee-Sutton gives Leathers much of the credit for the organization’s collaborative dynamic.

“Cole has been an outstanding leader of the SGA this year,” she said. “Following two years of disruption, Cole worked hard to lead the group through very intentional conversations and processes, and to foster a respectful environment for discussion and decision-making.”

Challenged with a few cultural issues, that environment proved crucial.

“I like to think that a lot of my job was just supporting, and uplifting, and representing the student body,” Leathers said, “but there were times when we had to recognize problems in it.”

Addressing those problems required ethical leadership, which Leathers said he managed through prioritization—something he plans to apply in the job search or on future graduate and law school applications.

“I think W&J has made me understand that my worth isn’t built on a particular skill set,” Leathers said, “but a pretty broad range of skills that I’ve developed here.”

Having learned some of those skills as the leader of SGA, Leathers encouraged future presidents to stay committed.

“This is a group of people who are intellectually driven to do the right thing, so just stay calm,” he said. “It’s funny how many things don’t matter after a week.”

WASHINGTON, PA (April 6, 2020)—COVID-19 may have prevented everyone from congregating at local restaurants, but it hasn’t stopped Washington & Jefferson College (W&J) students from…