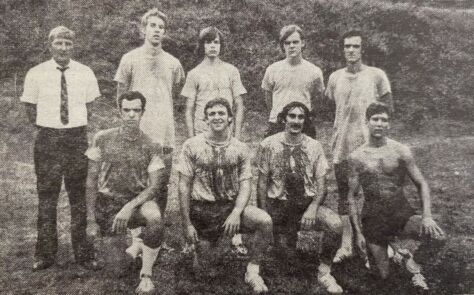 Mark E. Schweers ’75 and Joe Gigler ’77 were more than just cousins – they were classmates who both shared a love for their time at W&J.

Schweers was a model student-athlete – excelling both on and off the field – and someone his younger cousin always admired.

When Schweers passed away unexpectedly in 2016, Gigler wanted to find a way to honor Schweers’ legacy in a way that would make a positive impact in the lives of others.

After graduating from W&J with a degree in English, Schweers completed his graduate degree from Duquesne University School of Education. Over the course of his undergraduate and graduate careers, he developed a passion for working with students with disabilities.

At the time of his passing, Schweers was a special education teacher at Pine-Richland High School, where he worked for nearly 14 years. Gigler says his cousin was known throughout the school and his community as an immensely kind, patient, and selfless individual. Though teaching special education can be a challenging profession, Schweers formed strong, lasting relationships with his students and continually pushed them to excel both inside and outside the classroom.

“Mark had a true calling as a special education teacher and a wonderful gift,” Gigler says. “My wife, Carol, and I wanted to find a way to honor Mark’s legacy by continuing to inspire future generations of students.”

So, in 2017, Gigler met with Professor of Education James Longo, Ph.D. and former W&J President Tori Haring-Smith to explore how he could make a difference for W&J students.

From that meeting, Gigler decided to establish the Mark E. Schweers ’75 Memorial Endowed Scholarship in memory of his cousin. Awarded annually to one W&J sophomore, the scholarship aids students majoring in education who intend to pursue a career in special education and display financial need.

“So many students struggle to fund the costs of college, and I want to do my part to help attract the best and brightest students [to W&J] without regard for economic status,” Gigler says. “This felt like the perfect way to honor Mark at the same time.”

When asked how Schweers would feel knowing his memory is encouraging students to follow their dreams, Gigler says: “I know Mark would feel very good about inspiring W&J students to make a positive impact on kids and their families – just as he did throughout his life.”

To learn more about the power of endowed scholarships, contact Carolyn Campbell-Golden at 724-223-6519 or ccampbellgolden@washjeff.edu.