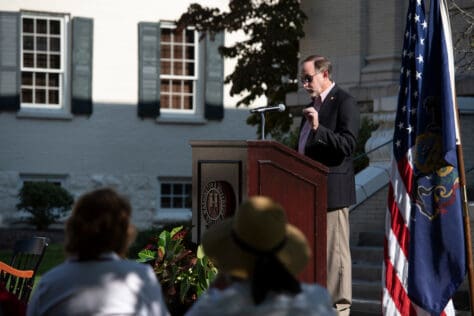 “Over the decades, the story of Charles West has held a special place in the hearts of all in the W&J community,” said W&J President Dr. John C. Knapp. “Dr. West personified W&J’s mission to produce graduates of uncommon integrity, and we are better today because of his personal character and fine example.”

Dr. West, a multi-sport athletics hall-of-famer who went on to become a prominent physician in the Alexandria, Va. area, was the first black quarterback to play in the Rose Bowl. Also a track and field champion, he was named to the 1924 U.S. Olympic team, though injury prevented his participation. He signed with the Akron Pros professional football team in 1924, but opted to attend Howard University Medical School in Washington, D.C. instead.

During the ceremony, however, Dr. West’s athletic prowess was overshadowed by his commitment to community service, the ethical leadership he displayed throughout his life, and the inspiration he still gives to W&J students.

Nickens remembered her father as “a symbol of compassion to all who struggle” and recalled that as a doctor he focused on serving the poor and underserved, and never turned anyone away.

“My father was forever grateful to W&J for their support, especially at a time when it was not popular to do so,” she said, recalling a game in which the College refused another team’s request to bench West because he was black. Nickens said she hopes her father’s story will continue to inspire the W&J community, and especially its students.

Clark was one of those students. During the ceremony he spoke about his experience in W&J’s Charles West Scholars Program, which provides financial support and other opportunities to outstanding African American students from Pennsylvania. The program introduced him to black male mentors in the W&J community who encouraged him to get involved with the Student Government Association. In his senior year, Clark became W&J’s first black SGA president.

“I was not only welcomed on campus, I also felt wanted,” said Clark who, like Dr. West, is pursuing a medical career. He is currently a student at The Ohio State College of Medicine. “I simply can’t overstate the impact that support from the Charles West Program had on me, and still has on me today.”

Dr. West practiced medicine in Alexandria, Virginia for 50 years and was often recognized and awarded for his community service. The Alexandria Urban League honored him in 1973, and in 1978 he received a Howard University Medical Alumni Association citation for his years of practice. Dr. West also received the W&J Distinguished Alumni Service Award in 1978. He passed away the following year, on Nov. 20, 1979. During the 2018 Tournament of Roses, Dr. West was inducted into the Rose Bowl Hall in a ceremony held in Pasadena, California.

Kelly Meeder is one of three finalists in the running for a $100,000 grant to improve technology in her classroom.