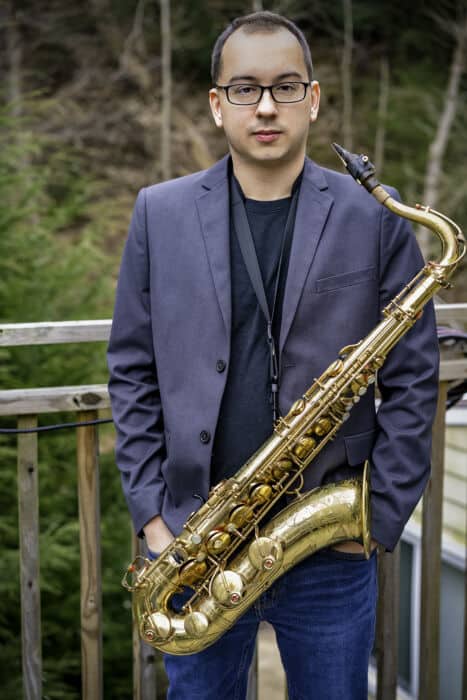 Clint Bleil is a composer and saxophonist from Pittsburgh, Pennsylvania. Clint has degrees in Music Education and Saxophone Performance from Slippery Rock University, where he studied under Jason Kush. Clint recently received his master’s degree in Studio Jazz Writing from the University of Miami, where he studied composition under Gary Lindsay, John Daversa, and Carlos Rafael Rivera.

Clint has received numerous awards in composition and arranging, including a SONIC Award for his jazz ensemble piece “It Matters,” which was performed at the 2019 International Jazz Composers’ Symposium. He also has received a DownBeat Student Music Award in 2019 for his arrangement of “I’ll Remember April.” Clint has composed, arranged, and transcribed for multiple different groups and ensembles, including Live From Here with Chris Thile, Project TRIO, the University of Miami Frost Concert Jazz Band, and the Henry Mancini Institute Orchestra.

As a saxophonist, Clint has performed and recorded in many different styles and ensembles. He has performed alongside Randy Brecker and Charles Pillow with the South Florida Jazz Orchestra, as well as Troy Roberts, Dave Holland, John Beasley, and Adam Rogers with the award-winning Frost Concert Jazz Band. He has also performed with rock and pop acts, such as the Temptations, Jay and the Americans, Dennis Tufano, and the Shirelles. Clint also has experience in the recording studio, where he served as an additional engineer on John Daversa’s three-time Grammy award-winning album American Dreamers: Voices of Hope, Music of Freedom.

Clint is currently a Visiting Assistant Professor of Music at Washington & Jefferson College, where he teaches woodwind lessons and music theory as well as leads the Jazz and Wind Ensemble. He also offers private woodwind lessons throughout the Pittsburgh area. He regularly performs in the Pittsburgh area with his quartet that focuses on modern jazz arrangements and compositions, as well as a funk/fusion group that he co-leads with his brother.