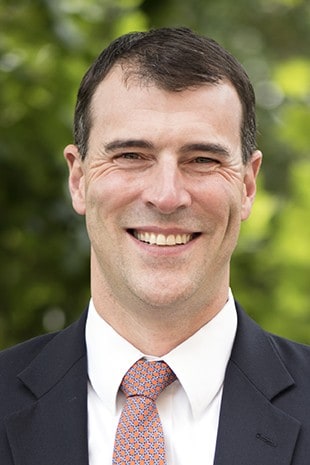 Kieran has run 14 marathons, plays guitar in an alt-country band, and enjoys hiking in the Adirondack Mountains with his two labradoodles, Ollie and Owen.

Associate Professor and Chair of History; Coordinator of the American Studies Concentration

David Kieran is associate professor and chair in the Department of History at Washington & Jefferson College, where he also coordinates the American Studies Concentration. He teaches a broad range of courses in U.S. history after 1900, with a special interest in war and society, the United States’ global engagements, and public memory. His courses include “Twentieth-Century America,” “War & Society in US Culture,” “African-American Protest,” “The United States’ War in Vietnam,” and “9/11 and the War on Terror in U.S. Culture.” His courses also frequently engage students in presenting history to the public, most notably through the exhibit “Down but not Out: Baseball After September 11, 2001,” which W&J students curated for the Flight 93 National Memorial. As well, he has led a JayTerm trip to Vietnam, in which students studied the continuing impact of the Second Indochina War on Vietnamese culture.

Kieran has written extensively about the intersections of war, the military, and society in contemporary U.S. culture. Most recently, he published Signature Wounds: The Untold Story of the Military’s Mental Health Crisis (New York University Press, 2019), which draws upon previously unreleased documents and oral histories to examine how the United States military, the Department of Veterans Affairs, and the American public confronted the psychological challenges that US troops faced during the Iraq and Afghanistan Wars. Kieran has presented material from Signature Wounds at the Pentagon and to the advisory board of the Army Study to Assess Risk and Resiliency Among Soldiers (Army STARRS), and his research has been cited in the RAND Corporation’s official history of behavioral health during the Iraq and Afghanistan Wars.

He also recently co-edited, with Rebecca A. Adelman, Remote Warfare: New Cultures of Violence (University of Minnesota Press, 2020), a collection of essays that reframe the notion of war at a distance between debates over ethics and efficacy. His first book, Forever Vietnam: How a Divisive War Changed American Memory, was published by the University of Massachusetts Press in 2014, and he is also the editor of The War of My Generation: Youth Culture and the War on Terror (2015) and the co-editor, with Edwin A. Martini, of At War: The Military and American Culture in the 20th Century and Beyond (2018), both published by Rutgers University Press. His articles have appeared in The Journal of War and Culture Studies, The Journal of American Studies, American Studies, Children’s Literature Association Quarterly, War and Society, and in several edited volumes, and he is the co-editor of a special issue, also with Rebecca A. Adelman, of a special issue of The Journal or War and Culture Studies on the topic “Reconceptualizing Cultures of Remote Warfare.” His popular writings have appeared in The Washington Post, Slate, and The Toledo Blade, among other venues.

Currently, Kieran is writing a history of organizational and cultural change in the U.S. Army from 1973-1991 and a history of the debate over amnesty for men who resisted conscription during the Vietnam War.

Teaching 9/11: A Historical Event and a Lived Experience for Today’s Students