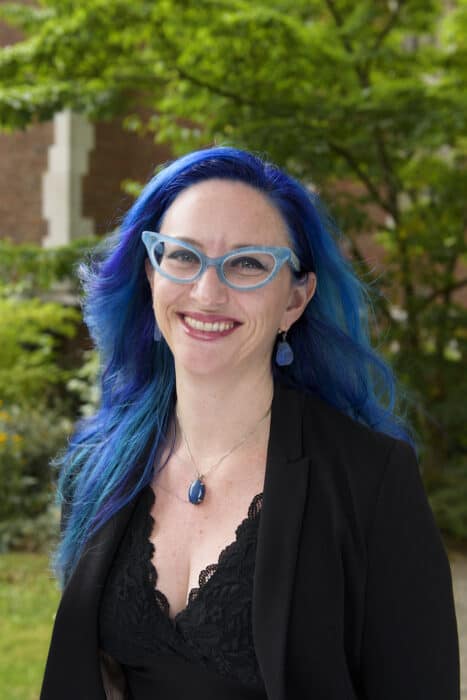 Leah Goldman is Assistant Professor in European History at Washington & Jefferson College and an Associated Scholar at the Center for Russian, East European, and Eurasian Studies at the University of Pittsburgh.

As a cultural historian, Dr. Goldman uses classical music as a lens to investigate the relationship between artists and the state in the Soviet Union. Her current book manuscript, Creative Comrades: Censorship and Collaboration in Late-Stalinist Music, explores the relationship between musicians and the state during the late Stalinist era, a moment when the Soviet government was intensely focused on cultural production. It argues that in the absence of clearly defined aesthetic standards and the presence of high-stakes consequences for transgression, Soviet composers developed a form of collective professional self-censorship, which proved far more effective at controlling their creative production than the state could have achieved alone. Faced with rising political tensions, the musical community subjected new works to a mandatory process of critique and revision within the Composers’ Union and Bolshoi Theater. Censors took part because they, too, were under political pressure and also because many were composers themselves. Creative Comrades argues that new works were so profoundly shaped by this process that its participants must be understood not merely as advisors and regulators, but as co-authors. It definitively invalidates the state-vs.-artist framework that has long dominated the study of Soviet culture and demonstrates that both censorship and authorship under Stalin must be understood as a single collaborative process. Further, it moves the scholarship beyond traditional questions of state interference toward consideration of new forms of creativity. Creative Comrades argues that Soviet composers willingly took part in censorship, and as creators, they were often better for it.

Dr. Goldman is also pursuing research projects that explore the intersection of cultural production and national identity politics in the Soviet and post-Soviet space. This work includes case studies of minority composers’ position in the Soviet musical hierarchy and an attempt at musical reclamation of the Crimean Peninsula by a contemporary Russian artist. In addition, Dr. Goldman has embarked on a book-length study of the Stalinist and post-Stalinist effort to create “national” operas for the Soviet Central Asian republics, as a soft power mechanism for legitimizing Soviet authority in the region.

Dr. Goldman has presented research at a variety of national and international conferences and has published articles in Journal of Musicology, Jahrbücher für Geschichte Osteuropas, and Perspectives on Europe. In collaboration with a group of Chicago-based scholars, she co-curated an exhibit of Soviet children’s literature at the University of Chicago’s Regenstein Library Special Collections Research Center and contributed to the published catalog, Adventures in the Soviet Imaginary: Children’s Books and Graphic Art. As an interdisciplinary scholar, Dr. Goldman has brought together historians, musicologists, and other scholars of culture as co-founder and past president of the Russian, Eastern European, and Eurasian Music Study Group. She is also a member of the public history network Women Also Know History and welcomes opportunities to speak to the public about the history and current events in Russia and Europe.

At W&J, Dr. Goldman teaches courses in Russian, Soviet, and European history in the modern era. In approaching these subjects, she emphasizes their transnational and comparative dimensions and introduces students to a range of methodological and interdisciplinary perspectives. Through community building and collaborative learning, she encourages students to engage directly with the sources, reconsider their assumptions, and draw their own evidence-based conclusions about the past and how it has shaped the world around them. Dr. Goldman has also advised senior theses in Russian history, European history, international history, history of empire, Jewish history, and cultural history.

Before coming to W&J, Dr. Goldman taught Russian history, European history, and Humanities at Reed College, Lewis & Clark College, and Northern Arizona University and held a Fellowship at the Center for Slavic, Eurasian, and East European Studies at the University of North Carolina at Chapel Hill.