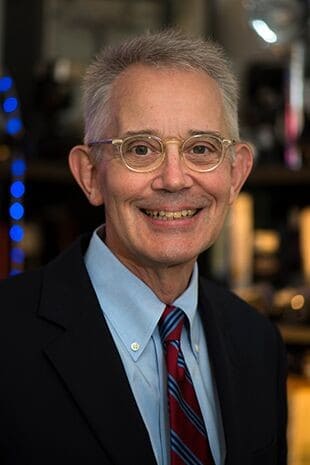 He was an Infantry officer during and after the Vietnam War era.

William Sheers is a professor and former chair of the Physics Department. He has taught: theory and laboratory courses in physics and astronomy, introductory and advanced programming courses in C++ and Java, a course in Electrophysiology of the Retina, and a First Year Seminar course in aspects of the American War in Vietnam. He has co-taught an introductory neuroscience course, and for fun, he has taught a course in scientific and artistic glassblowing for many years.

Dr. Sheers’ research interests are in several areas including biological physics where he has studied light scattering and the dynamic behavior of ion channels in retina. He has worked in photon correlation spectroscopy and is currently studying high-power pulsed magnetic fields and pulse forming networks. His areas of expertise include nuclear and atomic physics, physical neuroscience, computer programming and interfacing, electronics, high vacuum systems, design and fabrication of instrumentation and apparatus, laser applications, and the whole-cell patch-clamp technique.

He has worked at Brookhaven National Laboratory, Los Alamos National Laboratory, and Sandia National Laboratory in Albuquerque, N.M. where he performed his doctoral research. He has held visiting appointments in the Department of Electrical and Computer Engineering in biomedical engineering at the University of Wisconsin, Madison, and in the Ophthalmology Department at Baylor College of Medicine where he also spent a two year post-doc in the Ophthalmology Department. His favorite hobby is distance running in Washington Park. He is a competitive pistol marksman with the Three Rivers Leathernecks Detachment of the Marine Corps. League.