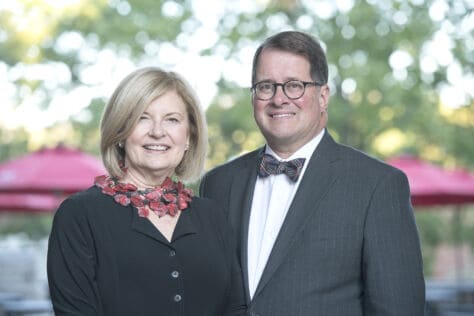 Louise Kirkpatrick Ross ’74 grew up in Vandergrift, Pa., raised primarily by her grandmother, mother and aunts.

“They were a force to be reckoned with,” she says fondly of the women in her family – their determination showing even when it came to her choosing a college. “I had applied to a handful of liberal arts colleges that my mother and aunts had allowed me to apply to. I really liked William & Mary College. They said I could apply there, but I couldn’t go there.”

Washington & Jefferson College was another story.

Her grandfather, “an Italian immigrant, didn’t have the benefit of an education but was a very learned man,” she recounts. “Male relatives went to W&J, and he wanted to send a child there.”

The timing couldn’t have been better. W&J’s board of trustees had just voted to become a co-educational college in December 1969. In January 1970, Ross’s family drove her to Washington, Pa., to visit W&J.

“I had a great visit,” she says. “It felt warm and welcoming.”

She joined the unique community of young freshmen women who would become part of the College’s first co-ed graduating class of 1974, with a double major in psychology and economics. She worked at W&J for five years in the admissions office as a recruiter and later married Pete Ross ’74, who become a dentist.

Following the 40th anniversary of W&J going co-ed, Ross helped drive the effort to bring the College’s “1970” sculpture to campus in 2014. She continues to lead the College today as a member of its Board of Trustees.

“I don’t think anybody expected any less of us because we were women,” Ross says of her experience as a student and beyond at W&J. “I’ve had a wonderful experience. I’ve felt welcomed; I’ve felt accepted.”

As active, lifelong alumni fixtures at W&J, Ross and her husband (who had settled in Lancaster, Pa., where they raised their family and built a successful dental practice) couldn’t wait to take their daughter, Abbey Ross ’04, to see their alma mater as she considered where she would spend her college career.

“We took her there and said, ‘Let’s just go out for a walk,’” Ross says of their visit, laughing. “And people would say, ‘Hi, Pete and Louise.’ That turned her off.”

Abbey enrolled at another institution out of state for her freshman year.

That didn’t last long, though, Ross relates. “Abbey said, ‘I made a mistake. I should have gone to W&J. Do you think they’ll take me?’ I said, ‘You’ll have to find out.’ To be honest, she loved it so much I wasn’t sure we’d get her out in four years.”

Exactly 30 years after they graduated, Abbey Ross, a French and history major, became a graduate of W&J.

She had been mentored by Theresa Cavoti, wife of Nick Cavoti, professor emeritus of psychology, who had a high-level administrative position with a clothing company. Abbey now works as a designer in the fashion industry in New York City.

Such experiences, Ross says, influenced her decision to support and help drive an alumnae effort to launch a public art competition that ultimately would lead to the installation of Chicago artist Guy Bellaver’s “1970” sculpture on campus next to the president’s house.

“I just always thought there should be something to remember the first class of women,” Ross says of the monument. “We were pioneers, I guess.”

WASHINGTON, PA (February 18, 2022)—After spending the summer of 2021 interning at a chocolate empire, W&J December graduate Keith Knowell is set on making his...