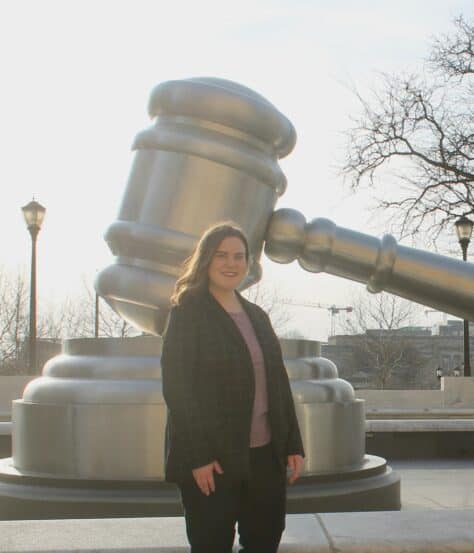 WASHINGTON, PA (March 14, 2022)—W&J senior Natalie McBride may be a president now, but after months working in a courthouse, she’s ready to explore the judicial branch of government.

A political science and psychology double major, McBride started interning for Judge Traci McDonald in the Washington County Courthouse in September of last year and has fallen in love with law serving in the role.

“It’s been the best hands on experience,” McBride said. “And I feel like I’m starting to get better at understanding the legal process.”

With a wide variety of responsibilities, ranging from creating file packs for cases and documenting court orders, to simply signing individuals into court and calling them into the courtroom, she’s well-versed in many behind-the-scenes elements of law but most interested in the courtroom action.

“The best part is I get to sit in on all of the hearings. I just sit there in awe the entire time,” McBride said. “I like to hear counsel go back and forth because then it starts to make me ask questions.”

Asking questions is actually how she landed her role with McDonald. After the judge spoke to one of McBride’s political science classes, McBride reached out to McDonald, asking if she took on interns. After a brief email exchange, McDonald offered her the job.

“I think it’s made me more compassionate and taught me to become more understanding,” McBride said. “I used to be somebody who was really straight forward and didn’t always pay attention to both sides, but now I’ve learned to think a lot more critically, because everyone needs someone to stand up for them and give them a voice when it is most necessary.”

Noting that good legal practitioners often possess these traits, McBride said she’s glad to have them, as she hopes to become a criminal prosecutor and future judge with the help of W&J.

“I’ve realized that my political science classes and psychology classes have blended well together to make me see the law from what I’ve studied, because I’ve also learned behavior,” said the Pi Gamma Mu honors society member. “And the judge says that’s a big part of being a judge—being able to observe that behavior.”

But McBride added the College’s role in her success has gone beyond education.

“W&J has given me advisors that are willing to help me achieve my goals by pushing me to go after what I want,” she said, noting that she’s already been accepted into law school. “Professor of Psychology Rebecca McDonald and Professor of Political Science Joseph DiSarro have molded me into a determined, conscientious student. Their support means the world to me.”

So too does the support from everyone else at W&J.

“I always say this,” McBride said. “It’s the W&J community. You don’t become a number, you become Natalie. It’s made me go into this and say, ‘I’m proud to be from W&J.’”

WASHINGTON, PA (July 6, 2020)–Though our Commencement festivities have been postponed, we’re still excitedly celebrating the Class of 2020 and all of their accomplishments. As…