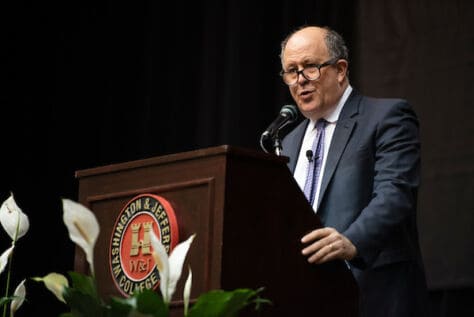 Michael Abramowitz, president of Freedom House, opened Washington & Jefferson College’s 2020 Symposium on Democracy with a message for the country: the struggle to revive democracy at home, rebuild faith in democracy abroad, and retake the soul of democracy from those who abuse its good name is the struggle of our time – and the world has it’s eyes on the United States.

“Our actions and our debates draw the attention of the world,” he said. “The words and policies of our leaders are exploited by people of bad faith, by dictators and demagogues everywhere. Likewise, they are heard by freedom fighters and democracy champions… I can assure you that what happens in America matters, and that these activists are paying close attention to what is happening in our country.”

Abramowitz’s keynote talk, “The Decline of Global Freedom,” took an honest look at the state of democracy in today’s world, but offered hope for the future. He noted that America has historically been a society where free speech and press freedom was guaranteed, opportunity was not limited to the elite, and newcomers were welcome. This made possible the Civil Rights Movement and the movement for gender equality, and served as a model for citizen movements and policy overhauls elsewhere in the world.

But America as a democratic model is now in jeopardy, he said. Press freedom is under attack and the collapse of regional newspapers has removed an important source of accountability for government. The rapid rise of digital communications has allowed for the viral spread of fake news; there is growing corruption in political system, integrity of elections is at risk from foreign interference, and tribalism dominates our political dialogue, he said.

Abramowitz said that the United States historically has been an example of how democracy can be renewed and improved, and while the country is far from perfect, we have a responsibility as one of the world’s democratic leaders.

“We have to make a much stronger case for the virtues of democracy and its crucial connection to our prosperity and security,” he said, noting also that satisfaction with democracy has declined recently, as much the result of economic dissatisfaction as a lack of understanding about the extraordinary accomplishments of free people and free markets. “As American democracy revitalizes itself, so to will we be in a better position to make the case for democracy beyond our borders.”

Finishing his speech with a quote from Eleanor Roosevelt, an early supporter of Freedom House, he ended by adding a call to action.

“I urge you all to give and hazard all you have in defense of democracy,” he said. “The fate of the world depends on it.”

Freedom House is an independent nonpartisan organization dedicated to the expansion of democracy and freedom around the world. We analyze the challenges to freedom, advocate for greater political rights and civil liberties, and support frontline activist to defend human rights and promote democratic changes. Freedomhouse.org

Washington & Jefferson College (W&J) students followed a faculty panel on The Intersection of Technology and Democracy held Monday, Feb. 12 with a panel discussion...

Washington & Jefferson College (W&J) ended its inaugural Symposium on Democracy Thursday, Feb. 15 with a discussion of the founding fathers for whom the college...