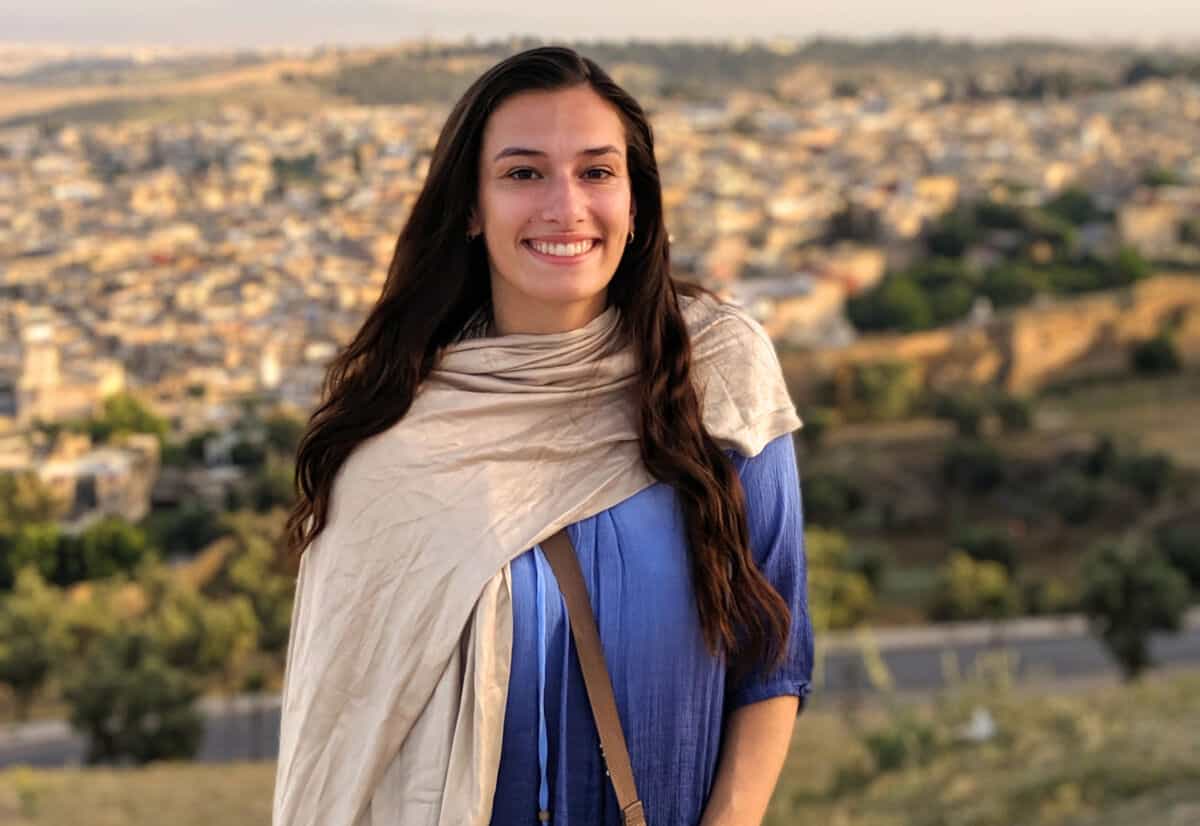 An exploratory project in their junior year led Alexas Iams ’21 and Hannah Johnston ’21 to being published co-authors in a mathematics journal during their senior year.

The two math majors, along with Assistant Professor of Mathematics Robert Muth, Ph.D., continued researching their MTH320 “Junior MathTalks” project throughout the summer of 2020, leading to a published paper titled “Searching for quicksand ideals in partially ordered sets,” which was published in the “Australasian Journal of Combinatorics.”

Ultimately, Alexas, Hannah, and Professor Muth set out to develop an answer to the question, “How can you quickly yet safely determine the location of the quicksand pool before you’ve used up your stones?”

Additionally, the work conducted by Professor Muth, Alexas, and Hannah (as well as earlier work done by Daniel Florentino ’21 and Ethan Moy ’21) was highlighted recently in an article on 3 Quarks Daily, a science, arts, politics, and philosophy website, where their research was compared to the well-known computer game Minesweeper.

Biology major Emree Downey ’22 was just one of 11 inaugural recipients nationwide of the Rooted In Science Scholarship from UNCF to defray costs toward her college tuition. The scholarships were awarded to Black women pursuing a degree in STEM fields at historically Black colleges and universities (HBCUs) and UNCF-member schools.

With multiple research internship experiences, a lab assistantship, and teaching assistantship, Elisa Yazdani ’21 was a prime candidate for biostatistics graduate programs across the nation, earning acceptance into seven top programs. She has chosen to pursue a Ph.D. in biostatistics at Vanderbilt University.

Though Elisa thought she would become a physician when she started at the College, the chemistry and psychology double major and mathematics minor, found a passion for biostatistics at W&J.

“I came in wanting to be a medical doctor because I thought that was the only way to improve people’s lives in health, but I’ve realized there’s a whole field in biomedical research and there’s so much work to be done,” Elisa said.

With funding from the Maxwell Internship Award, Jared Heller ’21 worked alongside pain medicine specialist Dr. David Provenzano in the summer of 2020 to study how spinal cord stimulation could be used in treating intractable lower back pain. Together, Jared and Dr. Provenzano wrote multiple articles on their findings that they’ve submitted for publication. Their work was published in the Journal of Pain Research and they were selected to present a poster at the 2020 ASRA Pain Medicine Conference.

Jared plans to continue his work in the field of clinical research, taking some time before medical school to work with Dr. Provenzano in the search for more efficacious treatment options for people who are suffering from chronic pain.

You could say W&J is in Jared Heller’s DNA. The senior neuroscience major is the son of Ira ’83 and Cynthia Heller ’85, and the brother of Ethan Heller ’18.

Taking on the World

As a recipient of the U.S. Department of State’s Critical Language Scholarship, Clara Sherwood ’22 planned travel to Morocco to learn Arabic. Though her travel plans were canceled due to the pandemic, attending the virtual language institute gave her connections that brought Refugee Voices to W&J’s campus this fall.

Clara hosted three sessions over the last year, including a breakout session during the 2021 Symposium on Democracy, giving students the opportunity to hear refugees share their experiences first-hand. She also created a website, claraalba.com/migrating, to share refugee and immigrant stories.

Recently, Clara was named one of only four undergraduate students in the nation to receive a study abroad award from the Sigma Delta Pi National Collegiate Hispanic Honor Society. She plans to study abroad in Sevilla, Spain in the fall of 2021 to learn about the Spanish music genre, Flamenco, which will complement her designed major, Music & Conflict Resolution.

Clara previously completed an independent study in Morocco and Spain where she studied migration as part of W&J’s Magellan Project, traveled to Senegal and the Gambia with Professor of Political Science Buba Misawa, Ph.D., and completed a virtual internship with the U.S. Embassy to Libya.

In the early days of quarantine in 2020, Jacqueline Mannina ’22 noticed that her then-10-year-old sister, Gianna, was having trouble adjusting to a new way of life.

The English major and education minor also read news reports about children all over the world having difficulties with the sudden change to their routine. As a future educator, she decided to do something to make the adjustment easier for America’s youth.

“I thought it would be a nice thing to write a book to help kids stay positive in such a tough time,” Jacqueline said. “So, I decided to write this book to help children understand that one day this will be over, and things will get better.”

Drawing inspiration from her own family quarantine activities and following her grandmother’s recipe for a quick and simple homemade pizza, Jacqueline wrote “Cooking Pizza in Quarantine,” and sent her manuscript to Dorrance Publishing. It was accepted, and the book is available online through Walmart, Target and Amazon as well as online and in-store at local Barnes & Noble locations.

“When I was younger, my parents would take me to Barnes & Noble and I would spend hours browsing the shelves. I’ve always loved that store, so to see my book in the kids’ department is pretty incredible,” Jacqueline said.

Jacqueline’s had a great early response to her book, selling a few hundred copies through online orders. She hopes to advocate for her work with more local retailers during the summer to have the book in stock in more physical locations.

And what about the most important critic, the now-11-year-old Gianna?

“She thinks it’s great. She tells everyone about it,” Jacqueline said. “I’m so glad that I could do this for her.”

From Student to Teacher

Kenneth Jimenez ’21 enjoyed his time as a student at W&J, but the educator-at-heart will be the one mentoring the next generation. This fall, the history major and education minor returns to his hometown of Houston, Texas to teach eighth-grade social studies in the YES Prep public school system.

W&J is an IMPACT Partner Institution with school system, supporting a select number of students to visit the College with fly-out visitation programs and scholarship packages.