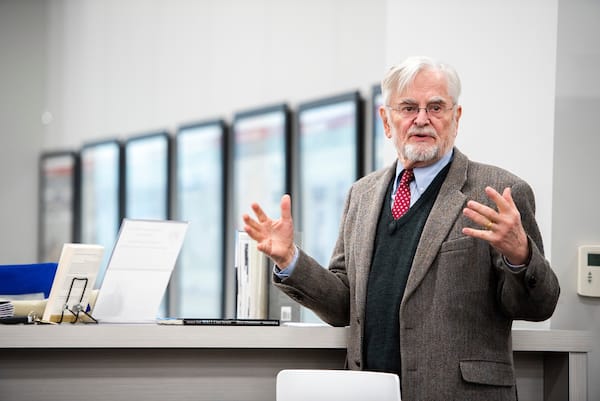 Democracy cannot thrive without a free press, but that free press is facing unprecedented challenges, Serge Schmemann said during his keynote talk at Washington & Jefferson College’s (W&J) Symposium on Democracy on Monday.

Schmemann, a Pulitzer Prize and Emmy-winning journalist and author, is a member of the editorial board of The New York Times focusing on international issues. During his career, he has been a correspondent from Johannesburg, Moscow, Bonn, Jerusalem and the United Nations, and covered the reunification of Germany in 1991, and the Israeli-Palestinian conflict in the early 2000s. Over the course of his career, he said, journalism has changed drastically.

“Today the free press I grew up in, the journalism I love, has been severely disrupted, reduced, and maligned,” he said. “And so has the ideal of democracy which…goes hand in hand with reporting. Democracy cannot breathe without the information and scrutiny that a free press provides and generates.”

He noted that newspapers historically were valued and trusted as sources of accurate information, with local newspapers serving the important democratic purpose of keeping local government in check. They were also profitable because they were packed with advertising. When the internet became widely accessible and people started reading news online the assumption, he said, was that readership would grow. But instead, both the business model and the credibility of outlets took a hit.

“We thought it would produce a democracy of news,” Schmemann said. “What happened instead was bubbles in which every prejudice is played out. It has become a highly polarizing medium.”

Schmemann said America is a beacon of democracy for the world, and warned that when the model of democracy is tarnished in the United States, people become disillusioned. However, he said the times might be changing, but they’re changing in a way that gives hope. At the New York Times, readership surges – especially among people in their 30s – when major events occur domestically and abroad and people seek information and clarification. Although our values are being tested and the free press is struggling, he said, it’s still America the world looks to for democracy and more.

“This is the place people look to for hope, but it will take a lot of work,” Schmemann said. “Judging by what I’ve heard today I have no doubt it will be done, especially by our students. That’s the task you all have before you.”

Schmemann got to continue the conversation in visits to classrooms on campus throughout the week. He also held an informal discussion at The Berlin Wall exhibit at The Clark Family Library on Tuesday afternoon. The exhibit, “Understanding the Border: The Berlin Wall 1961-1989,” was created by students and faculty in the College’s award-winning German Program to commemorate the fall of the Berlin Wall on November 9, 1989. The exhibit is sponsored by the Embassy of the Federal Republic of Germany, Wunderbar Together, and the Clark Family Library.

Serge Schmemann is a Woodrow Wilson Visiting Fellow and is visiting the College through CIC’s WWVF program.

Going Underground: Nathan Law returns to W&J Symposium on Democracy to talk about Hong Kong updates, his exile, and the next steps for the Umbrella Movement

WASHINGTON, PA (March 2, 2021)—What a difference a year makes. In his second appearance at Washington & Jefferson College’s annual Symposium on Democracy, activist Nathan…

Washington & Jefferson College (W&J) kicked off its inaugural Symposium on Democracy Monday, Feb. 12, with a panel discussion led by faculty from the College’s...

Washington & Jefferson College will host its inaugural Symposium on Democracy Feb. 12-16, 2018 in various locations on the W&J campus.