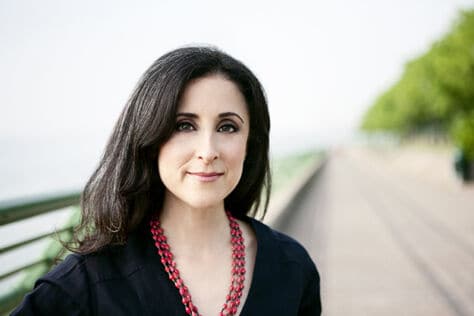 WASHINGTON, PA (Oct. 15, 2019) – Pulitzer Prize-winning journalist and author Sheri Fink spoke at Washington & Jefferson College on Oct. 21, 2019, giving a talk, “Five Days At Memorial: Triage, Medical Ethics, and the Law in Disasters,” that focused on the topic of her New York Times bestselling book, Five Days at Memorial: Life and Death in a Storm-Ravaged Hospital (Crown, 2013). The book is about choices made in the aftermath of Hurricane Katrina as medical personnel worked to care for patients with failing and limited resources. Her reporting on the issue raised questions and started national conversations about what constitutes an ethical response during disaster scenarios.

W&J Professor of English Jennifer Harding, Ph.D. said she wanted to bring Fink to campus after hearing her speak at a conference.

“She really connected the events to the ethical issues, like who should be evacuated first in a disaster, how doctors and nurses can care for terribly ill patients without electricity and air conditioning, and what kind of choices people make when they are exhausted and desperate,” Harding said.  “I knew right away that I wanted to bring her to W&J because of our strong pre-health and pre-law programs and her focus on ethical issues, which is something we encourage our students to think about.  I thought it would be a great lecture for our students and the community.”

Fink is a correspondent at the New York Times, where her and her colleagues’ stories on the West Africa Ebola crisis were recognized with the 2015 Pulitzer Prize for international reporting, the George Polk Award for health reporting, and the Overseas Press Club Hal Boyle Award. Her story “The Deadly Choices at Memorial,” co-published by ProPublica and the New York Times Magazine, received a 2010 Pulitzer Prize for investigative reporting and a National Magazine Award for reporting.

A former relief worker in disaster and conflict zones, Fink received her M.D. and Ph.D. from Stanford University. Her first book, War Hospital: A True Story of Surgery and Survival (PublicAffairs), is about medical professionals under siege during the genocide in Srebrenica, Bosnia-Herzegovina. Five Days at Memorial was the winner of the National Book Critics Circle Award for nonfiction, the PEN/John Kenneth Galbraith Award for nonfiction, the Ridenhour Book Prize, the J. Anthony Lukas Book Prize, the Los Angeles Times Book Prize, the Southern Independent Booksellers Alliance Book Award, the American Medical Writers Association Medical Book Award, and the NASW Science in Society Journalism Book Award.

Endowed in 2010, the J. Robert Maxwell ’43 Visiting Scholar Series provides the Washington & Jefferson College community, including students, faculty, staff and interested citizens, access to a wider array of viewpoints, opinions and practices from distinguished and influential leaders. J. Robert Maxwell (Class of 1943) was a lawyer, community leader and trustee emeritus of W&J. He received a Certificate in Meteorology from the University of Chicago, then served as a Lieutenant in the U.S. Navy until the end of World War II. After the war, Maxwell entered Harvard Law School, graduating in 1949. Throughout Maxwell’s life, he was an ardent servant of W&J. He was president of the General Alumni Association and of the Allegheny County Alumni Association, service for which he received the W&J Award of Merit in 1958. He was elected to the Board of Trustees in 1965 and served as an active member until he was appointed a Trustee Emeritus in 1985. Through his many years of service, Maxwell provided leadership and guidance with great wisdom and delightful good humor.

Phi Kappa Psi and Delta Gamma Give Back

The Greek community at Washington & Jefferson College (W&J) extended their philanthropic work outside of the Washington, Pa. community this semester through a successful athletic...

Carolyn Campbell-Golden, Ph.D. will join W&J's senior administration in summer of 2020 as the Vice President for Development and Alumni Engagement.