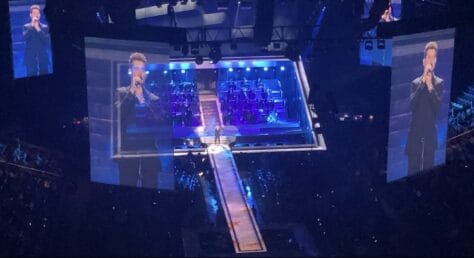 WASHINGTON, PA (September 22, 2022)—When Grammy-award winning artist Michael Bublé performed in Pittsburgh earlier this month, he was joined on stage by a president—a W&J president, that is.

Professor of Music & Director of Choral Activities Susan Medley, D.M.A., offered her alto voice to the Canadian crooner during his soulful rendition of Sam Cooke’s “Bring It on Home to Me,” which closed his “Higher” tour when it came to PPG Paints Arena on September 1.

Medley, who has been teaching at W&J for 19 years, sat down with the College after sharing the singer’s spotlight to speak about the experience. To learn more about her backup debut with Bublé, read the conversation below:

Let’s start at the beginning. What’s your background with music and performance?

Well, I started piano lessons when I was five years old, so music was always a part of my life. I taught school for a couple of years and decided I really wanted to be a college choral conductor. So, I attended the University of Cincinnati College-Conservatory of Music for a doctorate in choral conducting, and actually worked in New York City for three years as the associate director of education at Carnegie Hall. Then I found my way to Washington & Jefferson and the rest is history.

So, how did you get involved with “Higher” tour?

A lot of artists have musicians who travel with them on tour, and they supplement that with local musicians in each of the cities they visit. Somehow, someone who arranges for local talent got my name, contacted me in the spring of 2019, and, at that time, asked me to put together a 32-voice choir for Sarah Brightman. Brightman originated the role of Christine in Phantom of the Opera and was performing a concert at the Benedum Center in Pittsburgh. So, I did that, and he kept my number.

About a week before the Michael Bublé concert, he called me and wondered if I could put together seven singers who could sing in the gospel style. Originally, I wasn’t going to sing, I was just going to prepare the singers for the performance. So, I contacted seven singers and they all said yes, but one of them ended up having a conflict, and she happened to be an alto. I’m an alto, so I thought, “I think this is a sign that I’m supposed to sing this concert!”

How did it feel to be asked to participate in a Grammy Award-winning artist’s national tour?

It was amazing. When he called it was like, “Of course I’ll do it.” I only had a week’s notice, so I knew it would be a lot of work in a really short period of time, but I made time for it.

Did you rehearse with Bublé and his band at all? Did you get to meet him?

Unfortunately, we didn’t get to meet him because he was traveling with his two oldest kids, and when he was not on stage, he was with his kids. I wish we would have gotten to meet with him and talk to him, but he was being a dad. And he seems like a good dad.

We did get to rehearse with him though, very briefly. We rehearsed with the background singers he tours with around 4 p.m. Then, I think our sound check with Michael was around 5:30 p.m. or so, and the concert was at 8 p.m.

Can you tell me about your experience—being on stage and performing with this amazing artist in front of thousands of people?

Oh, it was so great. You just see this huge crowd, and the lights were on, and the band was so incredible, and he’s such an amazing performer, and it was just—it was really surreal. I had to think, “Are we actually doing this? Is this really happening?”

How did your students react to all of this?

Michael Bublé is a huge deal and he has broad appeal. When I said to my students, “I’m singing backup for Michael Bublé at PPG Paints Arena tomorrow night,” their first reaction was, “You are not!” Then they got pretty excited. The day after the concert, I showed them some pictures, showed them some of the video, showed them my stage pass, and they were like, “Oh my gosh!” They wanted to hear all about it.

So, you’ve worked at Carnegie Hall and performed with megastars like Michael Bublé and Sarah Brightman. How does working at W&J compare?

I love it. I absolutely love it. The students are just great to work with and we’ve been able to make some wonderful music.

In 2019, as I was asking people to sing for Sarah Brightman, I had three really outstanding students who could read really well, who could learn really quickly, and I knew could really deliver. I thought, “What a great opportunity for them,” and they became part of the choir, which sang that performance at the Benedum. So, when the right opportunities arise, I am able to involve students, and I try to do that any chance I have.

What’s next for you? Do you have any other projects in the works?

Yes! I conduct the Pittsburgh Concert Chorale, a 100-voice community choir, and we just finished a big project—we went to Europe over the summer—but, this spring, we’re performing in New York City.

Here at W&J, we’re in the rebuilding phase of the choirs. Having to rehearse online and in masks during COVID was difficult for singers, and many drifted away from choirs over the past two years. The W&J Choir and Camerata Singers are back to full, maskless rehearsals now, and it feels so good! I really encourage any students who love to sing to come and be a part of the choirs here at W&J. It’s an experience they’ll really enjoy, and you never know where it might lead.

Nathan Law, an internationally recognized advocate for democracy and human rights, is returning to Washington & Jefferson College as the keynote speaker at the school’s...

WASHINGTON, PA (May 5, 2020)-Though COVID-19 has delayed the plans of travelers, the Fulbright Commission has selected four Washington & Jefferson College (W&J) students as…