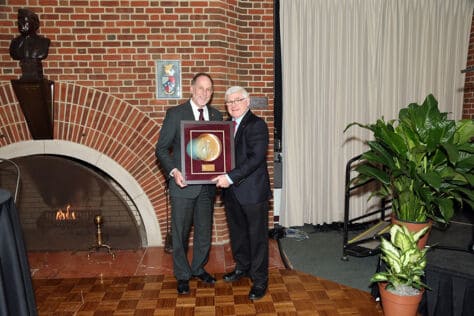 After receiving his bachelor’s degree in mathematics from W&J, Snee completed his master’s degree and doctorate at Rutgers University in applied and mathematical statistics. In his current work, he provides guidance to senior executives in their pursuit of improved business performance using Lean Six Sigma, quality by design, process modeling, and other improvement approaches that produce bottom-line results. His work focuses on the pharmaceutical and biotech industries, with clients that include Merck, Novartis, ImClone, Human Genome Sciences, Celgene, and Kraft Foods. He also serves as an adjunct professor in the pharmaceutical programs at Rutgers University and Temple University.

Prior to his current assignment, Snee used his broad experience and expertise as principal at Tunnell Consulting and as Six Sigma deployment leader with SBTI. He has played a major leadership role in process improvement initiatives for 32 organizations.

He began his career as a practicing statistician at DuPont in 1968, following two years as an assistant professor in statistics at Rutgers University. During his 24 years at DuPont, he progressed from being an internal statistical consultant, to managing statisticians, software engineers, and a variety of engineering specialists, to holding corporate level positions in R&D Planning and continuous process improvement. While at DuPont, Snee also was the originator and contributor to the strategies for formulations development which have been used with substantial benefit in chemical, process, pharmaceutical, biotechnology, and petroleum industries. In recognition of this contribution, he became the youngest professional ever to receive the ASQ Walter A. Shewhart Medal for the excellence of a technical contribution in the field of quality when he was 44 years old.

Snee has held a number of positions of trust in the consulting industry and corporations since his retirement from DuPont. Most notably, he was the vice president for process assurance at Bell Atlantic where he was responsible for leading the Corporation in the implementation of process management, applying the concepts of statistical thinking for improving customer service. His group defined Bell Atlantic’s core business processes, established roles and responsibilities for process owners, and created a corporate-wide model for business process management.

Prior to Bell Atlantic, Snee served as vice president, consulting at Joiner Associates from 1992 to 1996. He headed the firm’s consulting practice with the responsibility of managing the consultant force and overseeing client relationships. His clients included Bell Canada, Xerox, Reliable Insurance, USA TODAY, and GE Capital. He also served as president of the Delaware Quality Consortium that administers the Delaware Quality Award and served as judge for the Award. In addition, he has also been awarded ASQ’s Grant and Distinguished Service Medals and ASA’s Deming Lecture, Dixon Consulting Excellence, and Gerry Hahn Quality and Productivity awards. Snee has published seven books and more than 330 papers in the fields of quality, performance improvement, management, and statistics. His work has been recognized by more than 30 major awards. Snee is an honorary member and fellow of the American Society for Quality (ASQ), and an honorary member of the American Statistical Association (ASA) and the American Association for the Advancement of Science. He has also been elected as an academician in The International Academy for Quality.

Holiday traditions are a highlight of fall semester

WASHINGTON, PA (February 24, 2022)—When Shaqaiq Birashk, a former policy advisor on a USAID/DAI funded project with the Afghan government, had to leave Afghanistan suddenly...

Washington & Jefferson College graduate Charvonne Holliday, Ph.D. will return to W&J on Oct. 3 to speak with current students about her work and experience...