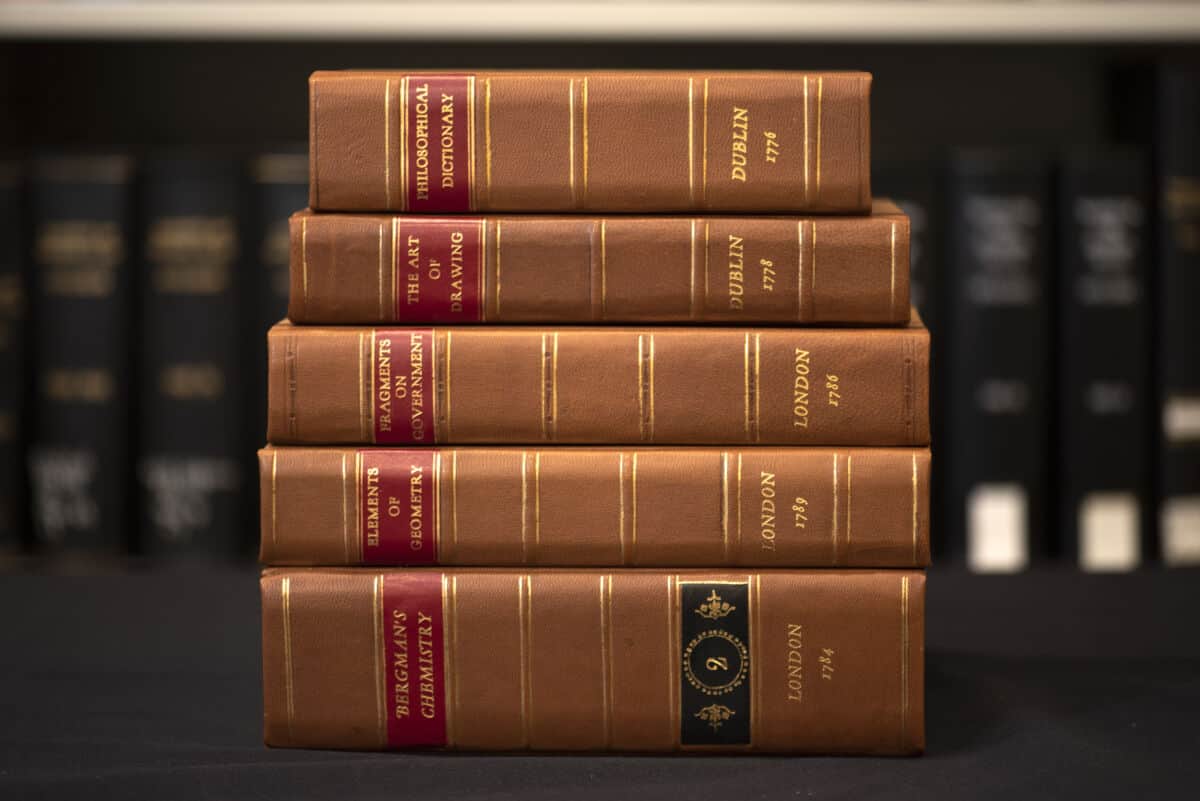 Benjamin Franklin would be grateful.

When this renowned colonial entrepreneur, journalist, statesman and American Founding Father donated 50 pounds sterling to the fledgling Washington Academy in 1789 to buy books for the school’s library, he probably hadn’t envisioned that some of those books still would be available to the College’s students and faculty 231 years later.

Thanks to a recent donation from alumnus Jess Costa ’82, W&J has taken significant steps to preserve the five books that remain of that original Benjamin Franklin-funded collection.

“With a generous donation, we were able to purchase custom handcrafted bespoke book boxes for all five volumes,” says Kelly Helm, college archivist in W&J’s Clark Family Library. “The new housing for each book will provide better protection from outside elements and degradation. Additionally, the boxes have a unified look, allowing the books to be displayed for visitors and exhibits with the honor they deserve.”

W&J’s predecessor, Washington Academy, acquired the books to start its library only eight years after the school was established in the southwestern reaches of the Commonwealth. When word was received of Franklin’s donation – which would amount to roughly $8,000 today, the Academy sent its own David Redick to Philadelphia to acquire the books and bring them back.

The last remaining books of that collection offer no light reading, though. Among them: “The Art of Drawing in Perspective Made Easy, to those who have no previous Knowledge of the Mathematics,” by James Ferguson, F.R.S (1778); “Physical and Chemical Essays; Translated from the Original Latin of Sir Torbern Bergman…,” translated by Edmund Cullen, M.D. (1784); “A Fragment on Government; being An Examination of what is delivered, On the Subject of Government in General, in the Introduction to Sir William Blackstone’s Commentaries” (1776); “Element of Geometry. Containing the Principal Propositions in the First Six, and the Eleventh and Twelfth Books of Euclid,” by John Bonnycastle (1789); and “The Philosophical Dictionary: or, the Opinions of Modern Philosophers on Metaphysical, Moral and Political Subjects. In Four Volumes. Volume 1” (1786).

Costa, the donor, says he wanted to preserve the books as a way to give back to W&J for the great liberal arts education he received there.

“I just love books,” he says of his interest in the Ben Franklin collection. “When I looked at those books, and you think of where those books have been and the minds those books have inspired, that is amazing. They were the first books that we [W&J] had. The opportunity to fund that was wonderful.”

“I want students 100 years from now to get the same joy from those books that I did,” Costa continues. “I am hoping to pass along that joy with my donation. They show where we’ve been and where we’re going.”

Costa recalls a specific note hand-written into the margin of “A Fragment on Government…,” presumably by a student during the early days of Washington Academy. The note, he says, brought him joy.

It reads: “Good Lord was the author of this incomprehensible stuff in Bedlam or out of it when he wrote this.”

“I read that and started laughing, thinking of that 1700s smart-aleck comment,” Costa says. “Someone today may use different words but would say the same thing. We’re all students, and we all share the same experience.”

“An important part of my job is to preserve not only the papers and documents that pertain to W&J’s history, but the books as well,” says Helm. “We have a large collection of rare books that date back hundreds of years before the College’s founding – our oldest is from 1491 – and these five volumes are the cornerstone of our rare books and special collections.”

Adds Carolyn Campbell-Golden, vice president for development and alumni engagement: “The special collection provided by Benjamin Franklin is an institutional treasure. We appreciate the gifts made toward the preservation of these books, which will help to ensure the collection can be shared with future generations of the W&J family.”