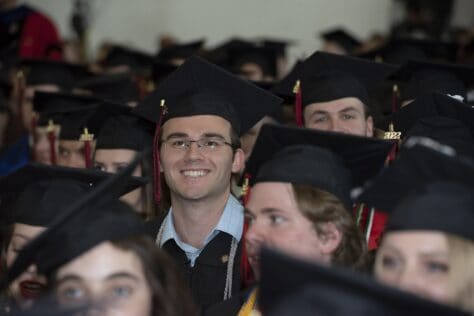 WASHINGTON, PA (May 24, 2022)—Washington & Jefferson College gave its nearly 300 graduates a grand sendoff on Saturday, with speeches from dreamers-turned-doers at its 2022 Commencement Ceremony.

The May 21 event featured student speaker Gabrielle Pasternak ‘22, who lit up the James David Ross Family Recreation Center with a senior address on the conception of success, before internationally recognized democracy and human rights advocate Nathan Law wowed attendees with his keynote address on finding fulfillment through fight and failure.

Law, who also spoke at the annual W&J Symposium on Democracy in 2020 and 2021, came to prominence as a college student while leading the pro-democracy “Umbrella Movement” in Hong Kong. Now living in exile in London, he continues to advocate for freedom in Hong Kong and other nations with repressive governments.

He has testified before the United States Congress and was a speaker at the December 2021 White House Summit for Democracy. In 2020, TIME named him one of the “100 Most Influential People in The World” and its readers’ poll ranked him No. 1 on the list. He was nominated in 2018 for the Nobel Peace Prize by U.S. congressmen and British parliament members, conferred the Magnitsky Human Rights award in 2020, and awarded the Democracy Medal by the International Association of Political Consultants in 2017.

Law earned his bachelor’s degree in cultural studies/critical theory and analysis in 2018 from Lingnan University. In 2020, he completed a master’s degree in East Asian Studies at Yale University, and in 2021 was named as a Pritzker Fellow at the University of Chicago’s Institute of Politics.

Yet, Law said success didn’t come easily to him.

“Before entering college, I actually missed a year because my public exam results were not up to my expectations,” he said. “I was upset at the time and felt like I failed…. But it was actually because I postponed my enrollment that I happened to be in a position of student leadership in 2014, when the Umbrella Movement broke out.”

“Sometimes we feel like we are stuck in a bad spot,” Law continued. “It is only in retrospect that we may realize it has been a gift all along.”

Vice President, Treasurer, and Secretary of the Student Government Association, President of the Accounting Society, President of Alpha Lambda Delta, Treasurer and Secretary of Order of Omega, Scholarship Director of Kappa Alpha Theta, Global Ambassador, and LINK Mentor, Pasternak, who received her Bachelor of Arts degree in Economics and Accounting, seems to be the picture of success. Yet she challenged her peers to examine the concept more closely and ditch the traditional definition for a more dissonant one.

“That’s what I love about the idea of success,” she said. “It means something different to everyone and it is constantly changing…. Wherever you may end up, keep in mind that you do not have to conform to anyone else’s definition of success, especially if you don’t believe it will bring you happiness.”

Whatever success had meant to graduates, Rachel Stalker, Assistant Director of the Center for Professional Pathways, and Dr. Jason Kilgore, Associate Professor of Biology, were recognized by the College as the Staff Member of the Year and the Faculty Member of the Year for helping them achieve it.

These awards were voted on by members of the Class of 2022 and, as in this role, Kilgore will give the address to incoming students at Matriculation in August.

WASHINGTON, PA (March 4, 2022)—In the United States, it can be difficult to acknowledge that America’s democratic republic has often failed to protect some groups...

WASHINGTON, PA (April 22, 2022) – Bianca Pate ’22 and Piper Scarry ’22 responded to the Coronavirus pandemic by turning their passions into their professions….