The story of the 1922 Rose Bowl has reached legendary status: the improbable tale of a small school from western Pennsylvania that overcame obstacles, made it to Pasadena, and made history in the process.

The game remains the only scoreless tie in Rose Bowl game history, an accomplishment likely to remain with the implementation of overtime to settle ties in college football. Unique to W&J that day was that despite traveling across the country with 17 players, the Presidents played just 11, meaning that those 11 played every snap on both sides of the ball. It was also the final Rose Bowl game at Tournament Park in Pasadena before the event was moved to Rose Bowl Stadium, where it is held today.

Washington & Jefferson College had the best college football team on the east coast, coming off of an undefeated 1921 season, when the Tournament of Roses Association unanimously voted to invite the school to play in the 1922 Rose Bowl. The Bowl game posed a significant challenge: W&J’s opponent, the University of California “Golden Bears,” was arguably the best college football team on the west coast, and were still riding the high of topping Ohio State University in the 1921 Rose Bowl. W&J accepted the Rose Bowl invitation, but traveling to Pasadena proved to have its own set of difficulties. 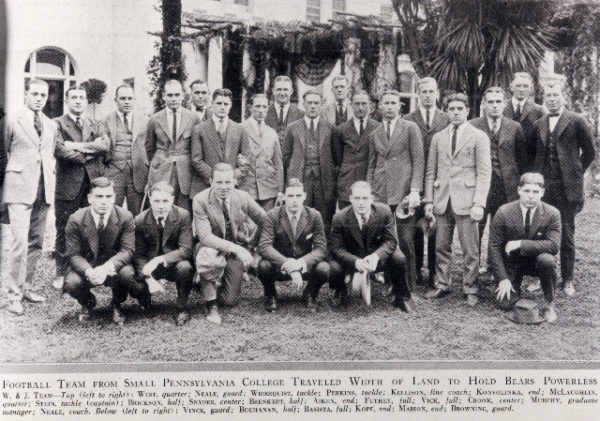 According to E. Lee North’s football history, “Battling the Indians, Panthers, and Nittany Lions … The Story of Washington & Jefferson College’s First Century of Football, 1890-1990,” W&J could only afford to pay for the minimum number of players – 11 men – to travel by train to the Rose Bowl. North’s book notes that R.M. “Mother” Murphy, W&J’s athletic administrator, didn’t want to spend College funds on his own ticket and mortgaged his house to afford the trip.

When teammate C.L. Spillers came down with pneumonia and had to be left in Kansas City for treatment, W&J risked not having enough men to field a team, and there are differing accounts about how this problem was solved. According to North’s account, reserve player J. Ross “Bucky” Buchanan had stowed away on the train, and was given Spillers’s ticket when he was discovered. However, a Dec. 28, 1921 edition of the New York Tribune notes that Murphy sent for Al Haddon to take Spillers’s place. Buchanan is shown in team pictures taken in Pasadena.

Coached by Earle “Greasy” Neale, an athlete in his own right – he was an outfielder for the Cincinnati Redlegs when they played in the famed 1919 World Series – and led on the field by Charles West, the first black quarterback to play in the Rose Bowl, W&J fought the Golden Bears to a historic scoreless tie. 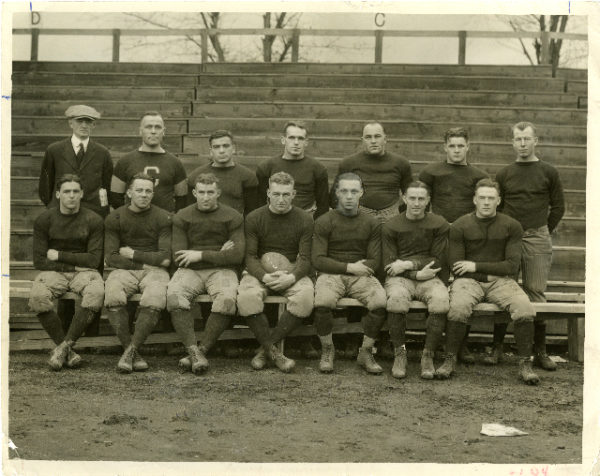 Symposium on Democracy – No Classes