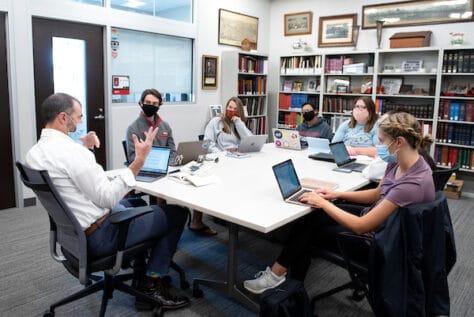 WASHINGTON, PA (May 4, 2022)—A year-long research project conducted by Washington & Jefferson College students, faculty, and staff will be on display this week when the exhibit Dynamic Decades: W&J and the City of Washington in the Midst of Social Change opens May 5 on the first floor of Clark Family Library.

Funded by a Council of Independent Colleges Public Humanities for the Greater Good grant, and in partnership with the Washington County chapter of the NAACP, students in the course “Public History Design and Exhibition: Race and the College” (HIS 372) spent the Fall 2021 semester researching historical aspects of W&J College and of the Washington community, and the role these have played in the larger societal pursuit of racial equity and justice.

They were joined in the Spring 2022 semester by students in “Introduction to Public History” (HIS 272), where students learned to design and install museum exhibits. A team from the communication information studies (CIS) capstone course, “Service Learning and Project Management” (CIS 400), collaborated with the History students to build a companion website.

The exhibit the class created includes the 1781 Washington County Slave Register, the syllabus and books for the first African American literature course offered at the College, and the robe and gavel (on loan from the Heinz History Center) of the first African American Federal Judge in Southwestern Pennsylvania, who was from Washington County. It also tells the story of their research findings, which reveal a complicated past of oppression, resistance, pride, and progress.

“The College has a complex history on matters of race and racial progress,” Kieran said. “We’ve seen many ways in which the people in the College and community have been at the front of the pursuit of racial justice. At the same time, there have been some moments that were more troubling.”

Some of those moments are evident from W&J’s founding in the late 1700s; some donors recognized for making early or founding gifts to the College were slaveholders. Through the centuries, there are records of minstrel shows and mock conventions (racialized performances that utilize black face and racial stereotyping) serving as popular forms of student entertainment, and accounts of racial exclusion in academia and, later, Greek Life.

These moments extended to and grew out of the surrounding community.

In the 1960s, some Washington, Pa. department stores prohibited Black patrons from trying on clothes and forced them to purchase whatever they appraised. And in 1990, the Klu Klux Klan organized a convention in Claysville—just 10 miles from Washington.

But there are many bright spots in this history too.

W&J began admitting Black students as early as 1830, with Martin Delany, an abolitionist, journalist, physician, and soldier, attending the school as a non-matriculated student in the early 19th century. Welcome Turner Jones is the first known Black graduate of W&J, graduating in 1890. Jones, a physician, writer, poet, and instrumentalist, went on to attend Case Western Reserve University School of Medicine and found the Whittaker Memorial Hospital in Newport News, Va.

Additionally, members of the campus and community rallied against the showing and filming of racist cinema like “Birth of a Nation” and “Free and Equal” in Washington. The local chapter of the NAACP protested the department stores that discriminated against them and marched against the KKK’s presence. Faculty at W&J created courses the focused in the African American experience. And students worked to establish the Black Student Union and started standing up to the racism around them.

Dr. Scott McCormick, an associate professor of religion in the 1960s and 1970s, led students to the Washington County Courthouse and recited Martin Luther King Jr.’s, “I have a dream” speech after the assassination of the civil rights leader, and College leaders brought Alex Haley, the author of Roots (an iconic novel which tells the tale of ancestral history and slavery), to speak in the 1970s.

But the work toward racial equality is ongoing, and that’s exactly why Kieran posed this project to his students.

“The moment in which we find ourselves is one in which grappling with that history is crucial,” he said. “Our country is engaged in a reckoning with race, and we wanted students to place current issues in a broader, historical context and to create something that would be a benefit to the community—to help the community think through contemporary issues, while being mindful of the larger history of which they are a part.”

Casile is convinced this exhibit will do just that.

“I think this is what we need,” she said. “Obviously, Black liberation and Black advocacy has been around for decades, but the way that technology has been used in the Black Lives Matter movement has allowed us to visualize more, a minority experience. And I think putting this exhibit on a campus that is predominately white will really help students visualize this in an educational way.”

For additional information on W&J’s history of racial inclusion, see the following:

Washington & Jefferson College (W&J) has earned renewal of its Level I Accreditation by The ArbNet Arboretum Accreditation Program and The Morton Arboretum.

WASHINGTON, PA (May 29, 2020)–Though our Commencement festivities have been postponed, we’re still excitedly celebrating the Class of 2020 and all of their accomplishments. As…

WASHINGTON, PA (Jan. 21, 2020)—JayTerm is a time for exploring new opportunities, and for some students in 2021, that includes preparing to apply for prestigious…