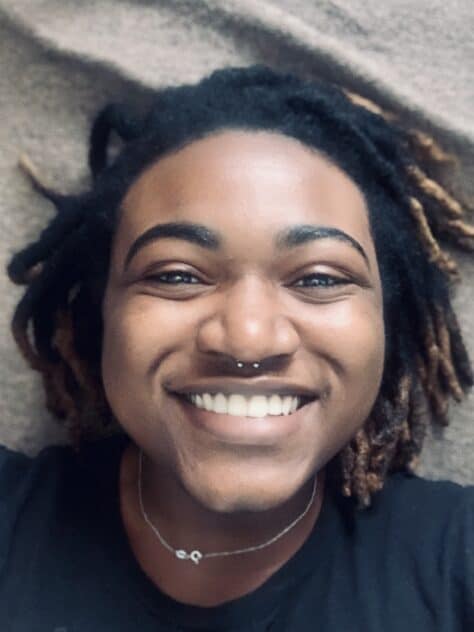 WASHINGTON, PA (May 31, 2022)—Recent W&J alum Adia Muhammad ’22 is proving that a penchant for poetry can really pay off.

Beating out established writers to win the 2022 Pinch Literary Award in Poetry for their satirical poem, “The Virgin Mary on MTV’s Teen Mom: Nazareth,” Muhammad earned a $2,000 prize, and is padding their pockets as the first undergraduate to claim the impressive accolade sponsored by The Pinch—a bi-annual literary journal based out of the University of Memphis and produced by the college’s Master of Fine Arts students and English Department faculty.

“It is absolutely unheard of for an undergraduate to win this prize,” said Associate Professor of English Dr. George David Clark, who has taught Muhammad for four years now and describes them as an intelligent, funny, and conscientious leader. “[The Pinch] publishes Pulitzer Prize winners and National Book Award winners, and, frankly, if Adia had asked me if they should submit, I might have warned them against it because the caliber of competition is so high.”

Having learned about the competition at the 2022 Association of Writers & Writing Programs (AWP) Conference—a massive gathering of professional and student writers that Muhammad attended with the help of SGA and the English Department, they themself questioned the decision.

“I did spend a few days waffling on if I wanted to throw away $20 on a contest where the only previous winners have been professionals with several books published,” the English major said. “This same poem was rejected by about four journals when I first wrote it, and was rejected by three more in the weeks before I received the good news from The Pinch, but I decided to submit because I’d learned that the worst they could say is ‘no.’”

Yet perseverance alone didn’t lead to the lofty prize. Winning with a poem she began as a first-year student in an introductory creative writing class with Clark, Muhammad said he and the larger W&J community, helped lead their to success.

“I came in with no prior experience with poetry, and due to his continued encouragement and challenging of my work, I am leaving with what I hope to be a long-lasting relationship to it,” Muhammad said. “Of course, between the creative writing classes, the visiting author series, the campus journal, and funding for important literary events like AWP, I’ve had so many opportunities to encounter inspirational work. To go out and get a coffee with someone whose work you’ve read and admire—and, in some cases, have them read, praise, and critique your own work—is so transformative.”

Prior to winning this poetry prize, Muhammad published fiction works in the undergraduate journals Oakland Arts Review and Glass Mountain—publications which propelled the Wooden Tooth Review editor to Pinch prominence and continuing classes.

After graduation, Muhammad will serve as a secondary English teacher and graduate student through a program called Urban Teachers, and eventually earn their Master’s in Education before taking on a new role in the classroom.

“This job has been a long time in the making, but I think this experience with The Pinch and my college career as a whole has taught me to take risks and to channel my perfectionism in more productive ways,” Muhammad said. “Try, fail, tweak, try again. That’s an energy I want to bring into my teaching.”

The Princeton Review highlights colleges with sustainable practices in place, and with programs like W&J’s Environmental Studies (EVS) major that prepares students for employment and...

Six Presidents presented their work at the Mathematical Association of America (MAA) centennial meeting this summer.