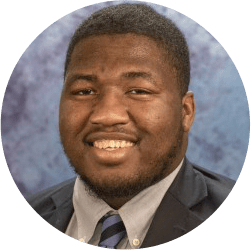 If you're coming here and you know no one, you can find your group of people-a group of people who will be accepting of who you are, your background, and will help integrate you into the culture.

When Darious Singleton ’18 first came to Washington & Jefferson College (W&J), he’d set his mind on medical school. So how did he become a thriving J.D. candidate at Duquesne University’s School of Law instead?

Professors who helped him pivot between W&J’s programs and explore his interests – all without losing time – set him on a path to success.

“When I got to W&J, I wanted to do medicine. I was pre-med, but my heart wasn’t in it,” Darious said. “I ended up being a communication arts major and found my passion there.”

Darious found support and encouragement from professors in both communication arts and the pre-law program, who helped him craft a course plan he was happy with. As graduation neared, he decided he would work as a paralegal for a year or two and bolster his law school application, not to mention adding some more time to study for the LSAT.

But Professor Joseph DiSarro, chair of W&J’s political science department, didn’t want Darious to put his potential on hold. He had another idea.

“He asked if I’d considered law school. I said yes, but down the road,” Darious said. “He told me, ‘There’s a test in February. If you want to take it, I’ll pay for it.’”

Darious couldn’t pass up the opportunity, but it only gave him a few months to study for the LSAT. With support from his professors, he prepared well and received a competitive score that – along with his impressive undergraduate work – earned him a spot at Duquesne.